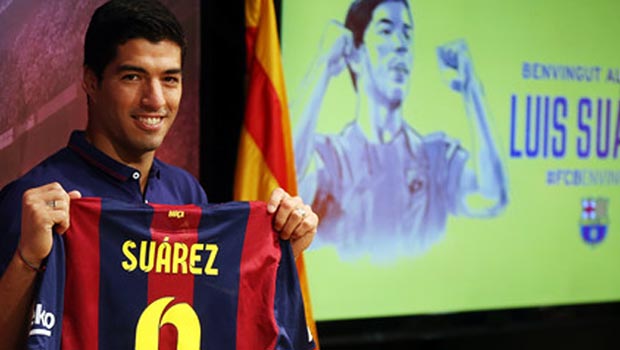 New Barcelona forward Luis Suarez vowed ‘never to bite again’ after he made his first appearance for the Catalans in a friendly on Monday.

The controversial Uruguayan was banned from all footballing activity for four months after biting Italy defender Giorgio Chiellini at the World Cup in Brazil this summer, although the striker is now allowed to train and play non-competitively with the Spanish club.

Suarez, who completed a £75million move from Liverpool to Barcelona earlier in the transfer window, has reassured the fans that he will not bite anyone again.

“I spoke to my psychologist and he said that I had to face reality and say I was sorry. The lesson is clear…it was my mistake. I say to the fans not to worry as it will not happen again,” he said.

Suarez made an appearance for Barcelona in a friendly against Club Leon on Monday as the Catalans thumped the Mexican champions 6-0.

The Uruguayan was unable to get on the score-sheet in the match as a brace from Neymar was just one of the highlights as the Brazilian made his return from a back injury.

Another two goals from Munir El Haddadi, whilst one apiece from Lionel Messi and Sandro Ramirez secured the convincing win ahead of the season opener against Elche.

Barcelona, who have signed the likes of Ivan Rakitic and Suarez this summer, are priced at 2.10 to claim the league title this time round as Luis Enrique looks to bring trophies back to the Catalans.

Rivals Real Madrid are the favourites for the La Liga at 1.85 following the arrivals of World Cup winner Toni Kroos and Colombian sensation James Rodriguez.