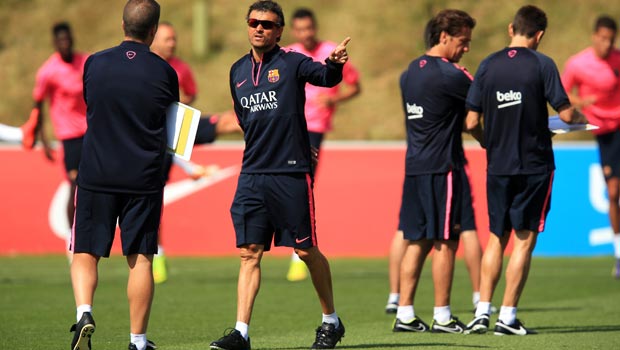 Barcelona coach Luis Enrique is feeling confident ahead of the new La Liga season after the Catalans recorded a thumping 6-0 win over Club Leon on Monday.

The Spanish outfit looked in imperious form against the Mexican champions in a match where new signing Luis Suarez came on as a late substitute at Camp Nou.

A brace from Neymar, who was making his first appearance since the back injury suffered at the World Cup, and two goals from Munir El Haddadi set Barcelona up for a convincing victory.

Argentina international Lionel Messi and Sandro Ramirez were the other scorers in the match as Barcelona completed their pre-season preparations in style.

There is already considerable pressure on the shoulders of Enrique before the new La Liga campaign has even begun with the fans hungry for a trophy after the previous disaster.

Barcelona lost out to Atletico Madrid in the race for the league title and were also knocked out by the same side in the quarter-finals of the Champions League in what was a campaign to forget by the club’s high standards.

Enrique will be expected to hit the ground running but, after a good showing against Club Leon, the coach says he is feeling confident with the current players in the squad.

“The club have to put together a team with the squad we have, and we’ve got an amazing squad. We’ve strengthened really well, the club has made a big effort and I’ve got a unique squad,” he said.

“We’re in good shape as I expected and we’ll keep on improving with matches and training.”

Barcelona, who are priced at 2.10 for the league title, start their campaign with a home game against Elche, with the latter one of the favourites to be relegated this season at 5.00.