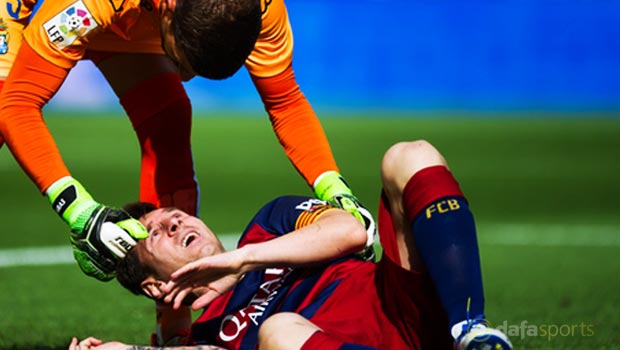 Luis Enrique says Barcelona must carry on without Lionel Messi after the Argentine was ruled out for up to two months with knee ligament damage.

Messi picked up the injury after just two minutes of Barcelona’s 2-1 La Liga victory over Las Palmas at the Nou Camp.

He was sent to hospital for scans and the Catalan club confirmed they expect him to be sidelined for around seven to eight weeks.

That would rule the 28-year-old out of as many as seven club games, including La Liga fixtures against Sevilla, Rayo Vallecano, Eibar, Getafe and Villarreal.

Barcelona moved back above Real Madrid following their win over Las Palmas with Rafa Benitez’s side unable to find a way past Malaga at the Bernabeu. Villarreal sit on top of La Liga after they got the better of Atletico Madrid at El Madrigal.

The Barcelona boss says losing Messi is a particularly sore blow but is challenging his squad to show they do not rely completely on their talisman.

“I’m always sad when one of my players gets injured and even more when it’s Messi,” said Enrique.

“But we need to accept the challenge and understand that this is part of football and get through it.

“We will not change our style of play without Messi, although there are many moments in games in which Messi liberates us and finds solutions for us, so we’ll have to strengthen in other areas and the team will have to step up without him.”

Luis Suarez scored both goals in the win over Las Palmas but some wasteful play in front of goal allowed the visitors to stay in the game and Jonathan Viera’s deflected strike late on set up a nervy finish at the Nou Camp.

Barcelona turn their attention to the Champions League next where they are 1.36 favourites to defeat Bayer Leverkusen on Tuesday. The Bundesliga side are 7.50 with the draw at 4.75.