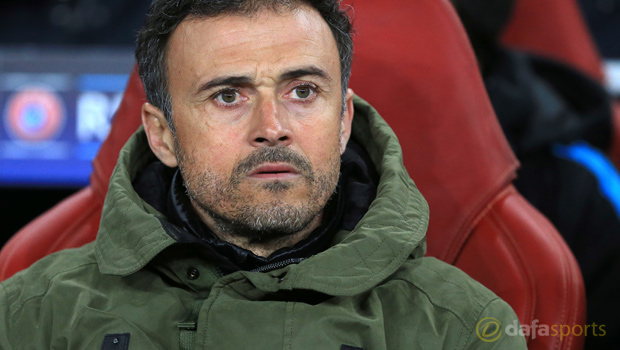 Four of Barcelona’s last five trips to the Basque city of San Sebastian have ended in defeat and the La Liga leaders will go there on Saturday night hoping to avoid going three league games without a win.

Barcelona let slip a two-goal lead in their previous away game at Villarreal and they also saw the lead frittered away last weekend as Real Madrid won El Clasico at the Nou Camp 2-1.

Despite those blips, Enrique’s team still lead the way by six points from Atletico Madrid going into the weekend’s action.

The Barcelona boss says it is time their poor record at Real Sociedad was corrected.

“If we look at the precedents, it’s clear there’s no other stadium in Spain as difficult for us,” Enrique said.

“A streak as long as that merits some reflection, so we can get to work because one thing is certain: it will be a difficult match. I’d say it is the most difficult away match of the season.”

Barcelona’s last win at Real Sociedad came in 2007, although the latter have spent three seasons in the second tier of Spanish football during the intervening years.

Sociedad midfielder Asier Illarramendi says there is no doubt that they will raise their game for the league leaders.

“We have beaten Barcelona a lot in the last few years and on Saturday we can beat them again,” he said.

“We are at home and we’re fired up for it. We are always extra motivated when we play against Barca.”

Sociedad are 10th in La Liga and have won just one of their last six games, although it was the most recent in a 2-1 win at Sevilla.