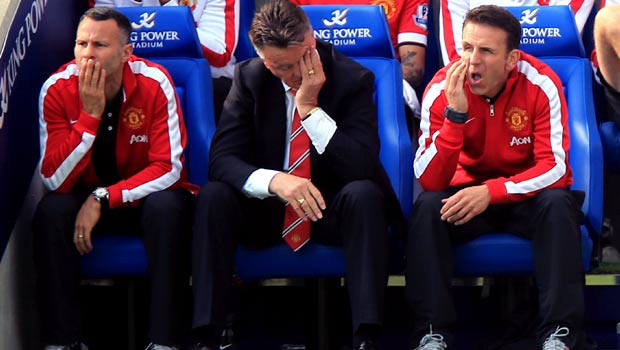 Louis van Gaal accused his Manchester United players of having Leicester City “in our pocket” before twice throwing away a two-goal lead to lose 5-3 against the Premier League newcomers.

Nigel Pearson’s men refused to throw the towel in and were given a lifeline when referee Mark Clattenburg awarded a questionable second-half penalty, which David Nugent despatched, before new signing Esteban Cambiasso equalised.

Jamie Vardy and then Ulloa sealed a memorable win for the Foxes and Van Gaal was at a loss to explain his side’s shambolic capitulation.

Van Gaal said: “It is not good because we had the game in our pocket and gave it away. Not because of Leicester; we gave it away and I don’t like that.

“We have too many players who want to seek for the goal.”

The former Barcelona and Bayern Munich coach refused to blame individuals and said the whole team was at fault for allowing Leicester back into the thriller at the King Power Stadium.

“You cannot say the defence was weak,” he added. “You play like a team, Leicester showed that. We did not play like a team in the second half and that is not only defence. In a defensive situation the whole team is responsible, not just one defender.”

To compound the situation Tyler Blackett will be suspended for West Ham’s visit to Old Trafford on Saturday because of a red card for a professional foul on Vardy, while Van Gaal is also awaiting the results of a scan on Jonny Evans after he left the stadium on crutches.

“I don’t know how bad it is,” said Van Gaal on Evans’ injury. “We will see tomorrow [Monday], he will probably have a scan.”

Manchester United are currently priced 1.29 in the match betting and the draw is quoted 5.56. West Ham are available to back at 8.70.