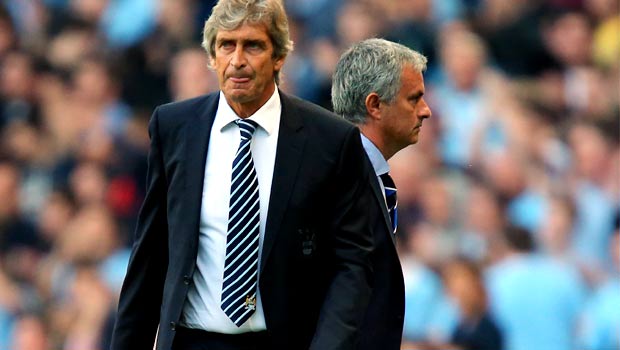 Manuel Pellegrini saw his Manchester City side salvage a point in a 1-1 draw against Chelsea – then accused the Premier League title challengers of being “a small team trying to defend”.

The west Londoners were on course to claim an early psychological blow in the title race when Germany midfielder Andre Schurrle put them ahead at the Etihad Stadium.

But Stamford Bridge hero Frank Lampard came off the bench to earn a share of the spoils for the 10-man champions, who had Pablo Zabaleta sent off, against the club he left in the summer.

Pellegrini said: “I think we played 90 minutes against a small team trying to defend.

“I would not be happy to play that way. Ten players defended their own half, they scored a counter-attack and they continued to defend until the end.”

The Chilean coach accused the visitors of employing the same counter-attacking spoiling tactics that saw Stoke City pinch a 1-0 away win at the Etihad in August.

“I think we played against exactly the same team we played against Stoke here,” the 61-year-old added. “It was very difficult for us to score but finally we did. The result is not what both teams did during 90 minutes.

“I don’t want to analyse Chelsea. What the other teams do, it is not my duty to analyse.”

Chelsea manager Jose Mourinho refused to elaborate on Pellegrini’s quip, but said: “Many times he says he doesn’t speak about me or my team but he continues to do so. Don’t ask me about these words.”

The champions have now gone four games in all competitions without a win and host Sheffield Wednesday in the Capital One Cup on Wednesday.

Pellegrini’s men are currently priced 1.15 in the match betting and the draw is quoted 7.30. The Championship side are available to back in the 90-minutes market at 13.61.