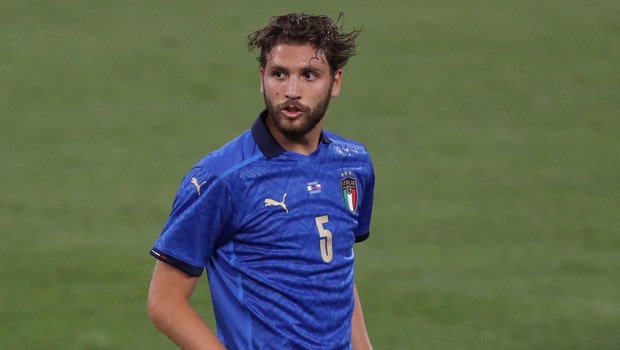 Sassuolo midfielder Manuel Locatelli has now scored two goals for the Italian national team. He is excited over the feat he described as the latest as the best experience in his career.

The Azzurri midfielder scored in the 4-0 thrashing of the Czech Republic ahead of the Euro 2020, which kicks off on Friday. Having had a successful season with Sassuolo, Locatelli is expected to play an important role for Roberto Mancini in the tournament.

Since making his debut in September last year,  the 23-year-old has continued to impress the former Manchester City manager by earning ten caps so far. Speaking about his experience from the major tournaments at the youth level, Locatelli said it’s an incredible emotion to be part of the senior side.

While describing such significant steps as exciting, Locatelli, in an interview with the FIGC’s official website, pointed out that a player sees things a little closer when he is in the Under-21 squad, but the senior national side comes with a lot of competitions for places, making it difficult always to get to play in a European Championship.

Having grown up playing alongside Gigio Donnarumma, Nicolò Barella, Patrick Cutrone in the youth teams, Locatelli said his biggest disappointment was the failure of the team to win the Final against France in the Euro Under-19 Championship, where PSG star, Kylian Mbappé was a torn in their flesh.

It could be recalled that Locatelli had opened his Azurris account in a 2-0 win over Bulgaria in the World Cup qualifiers earlier this year.

Italy will open its Euro 2020 campaign in Group A against TRurkey on Friday, June 11, before playing Switzerland (Wednesday, June 16) and Wales (Sunday, June 20).

The Azzurri will need to top the group at all costs to avoid a likely meeting against the number one team in the world, Belgium, which may likely win Group B.