Liverpool: The Reds have one hand on the trophy 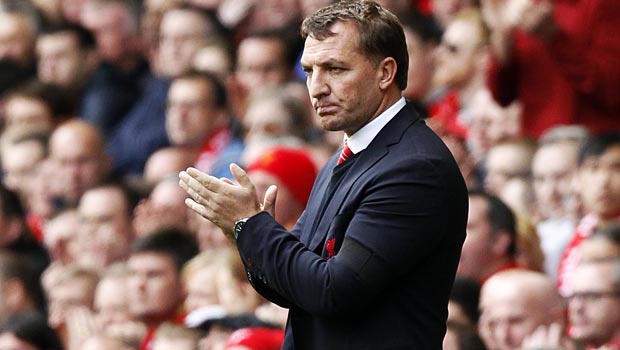 Liverpool boss Brendan Rodgers has one hand on the Premier League trophy but will have been mightily relieved that his side withstood a Norwich fightback to extend their lead at the top of the table to five points.

As has been the case for much of the season, the Reds came flying out of the traps at Carrow Road to establish early control, going 2-0 up inside 11 minutes but were hanging on the end as they were grateful to secure a 3-2 win to open up the sizeable advantage with just three games left.

Raheem Sterling enhanced his claims for a place in the England World Cup squad in a superb individual performance, opening the scoring after four minutes with a drilled effort giving John Ruddy no chance, before turning provider seven minutes later with a sublime pass to set up Luis Suarez.

The Uruguayan has been instrumental to Liverpool’s success this season and his goal took his tally to 30 for the season, remarkable considering he missed the first five league matches due to suspension.

It looked like it could have been a cricket score given the start but the Canaries to their credit never gave up and gave themselves a lifeline when Gary Hooper capitalised on a Simon Mignolet error to halve the deficit, nine minutes into the second half.

Liverpool, who always looked dangerous on the break, restored their two-goal cushion thanks to Sterling’s second, driving from the halfway line into the box before unleashing a shot which deflected off Michael Turner and looped over the helpless Ruddy.

Robert Snodgrass’ superb header with 13 minutes left gave Norwich hope but they could not find an equaliser with Ricky van Wolfswinkel spurning their best effort in the dying minutes.

Liverpool now look destined to win their first Premier League title since 1990 but face a massive game next Sunday when they host second-placed Chelsea at Anfield.

Jose Mourinho’s men were of course shocked by Sunderland at Stamford Bridge on Saturday and have the small matter of a Champions League semi-final against Atletico Madrid to contend with, either side of the Anfield clash, and even a win on Merseyside will still leave them needing Liverpool to slip up elsewhere.

Meanwhile, Norwich – just two clear of the drop zone – can take some positives from the defeat but they need to pick up points in what is a horrible run-in, starting with trips to Manchester United and Chelsea before their season finale at home against Arsenal.