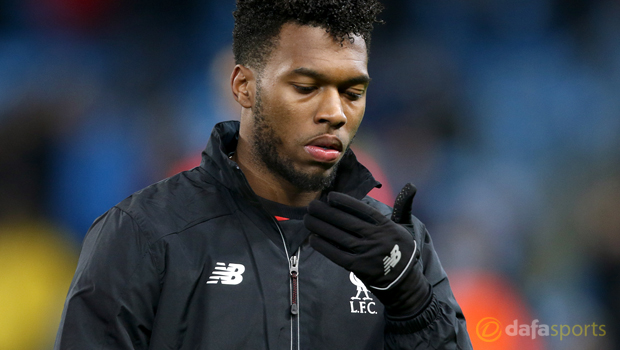 Daniel Sturridge remains some way off a return to action for Liverpool, Reds boss Jurgen Klopp has revealed.

The England forward has suffered another deeply frustrating season with injuries and Three Lions boss Roy Hodgson must be seriously considering whether or not the 26-year-old will be a viable option for the Euro 2016 Finals in France this summer.

Sturridge has managed just six appearances for the Reds this season, with his last comeback from injury lasting just seven days before he once against pulled up in the defeat to Newcastle on December 6.

Liverpool face Exeter in an FA Cup replay at Anfield on Wednesday night but Klopp says Sturridge is nowhere near being ready for consideration.

“No, no chance,” he said of Sturridge’s readiness to play. “He had a break in his training sessions because of some issues.

“Of course, that is not a situation where we can think about him.”

Former Anfield midfielder Dietmar Hamann played with Sturridge at Manchester City in his younger days and the ex-Germany international says his record as a professional is poor.

“If you look at his record since he has played professional football he probably doesn’t average half the games a season – and it has got worse at Liverpool.”

Sturridge was part of Hodgson’s squad as England exited the 2014 World Cup in Brazil at the group stage, with the Reds frontman grabbing the goal in the 2-1 loss to Italy.