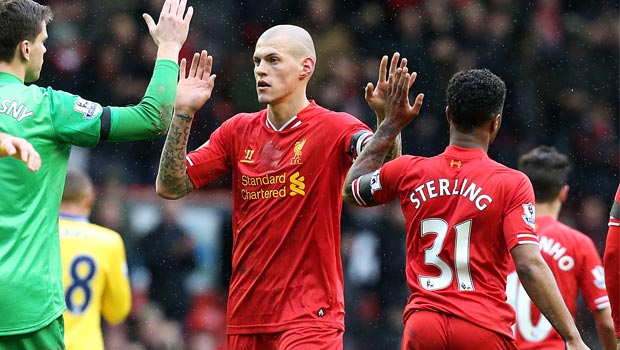 Liverpool defender Martin Skrtel has urged his team-mates to look forward to their next match against Fulham and build on their emphatic 5-1 win over Arsenal.

The centre-back grabbed himself a brace inside the first ten minutes at Anfield on Saturday. Arsene Wenger’s side failed to mark Skrtel and the Slovakia captain converted two crosses from Steven Gerrard set-pieces.

His goals put the Reds in control and they continued to dominate as Raheem Sterling and Daniel Sturridge put Brendan Rodgers’ side 4-0 up at the break.

Fourth-placed Liverpool now sit just six points behind table-toppers Chelsea after Manchester City slipped up on Saturday, and with the gap closing at the top, Liverpool are now being considered for a late title charge.

Despite this, qualifying for the Champions League is still the primary aim. Skrtel insists his team-mates should enjoy Saturday’s win but they must now turn their attention to Wednesday’s match against Fulham.

“It was a perfect win for us,” Skrtel told the club’s official website.

“We just wanted to start the game well and show we were ready for them – to be leading 4-0 after 20 minutes was perfect. We’re just happy we got three points from the game.

“We are ready. We beat Everton 4-0, we beat Arsenal 5-1 – they are big wins and big points for us. Now we have to be focused for the next game we play, on Wednesday.

“We need to get three points there as well – we’re going from game to game, trying to get as many points as we can.

“We’ll see where we finish at the end of the season. We know what we’re playing for – we’re fighting for our life to get into the top four.”

Liverpool are 1.43 to come away from Craven Cottage with a win.