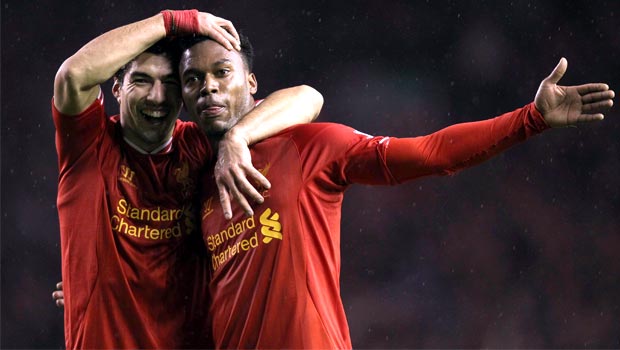 Liverpool boss Brendan Rodgers has praised the individual talents of Luis Suarez and Daniel Sturridge as he looks for the duo to put Arsenal to the sword again this Sunday.

The Reds produced arguably their best performance of the season last week when they thrashed the Gunners 5-1 at Anfield.

Arsene Wenger’s men had the best defensive record in the Premier League heading into the game but were badly exposed by the combination of Sturridge, Suarez, Raheem Sterling and Philippe Coutinho.

While only managing one goal between them last Saturday, Suarez and Sturridge have scored 42 Premier League goals in 49 combined appearances this season.

However, of the Reds’ last 28 goals only 12 have been scored by the frontline duo and Rodgers believes the great form the pair have shown throughout the season is beginning to rub off on their team-mates.

“I think great players make others around them better,” said Rodgers. “It is that difference between good and great. You have great players like those two who give the team confidence and they also open up spaces for others and both are very talented.

“They are helping making other players better and that is what is making us, as a team, better.” Given the way they played the last time they met, Rodgers is full of confidence his team can dispatch Arsenal and reach the quarter-finals of the FA Cup this weekend.

The Northern Irish coach believes the Gunners may still carry the scars of last week’s 5-1 mauling, while questioning whether they will be totally focused on the job given they play Bayern Munich in the Champions League next week.

“Usually a team will get time to overcome a defeat like that, so to come across us so quickly afterwards, it will be interesting to see the effects. Obviously it’s unusual for Arsenal to face a team that has beaten them like that so quickly, normally you get time to regroup,” he added.

“They will enjoy playing at home. It is an opportunity for them to build confidence back up again. We both have played a couple of times this week – we’ve had two excellent and different victories – but they will be looking to pick up their confidence.”

Arsenal are 5.00 to win this season’s FA Cup while Liverpool can be back at 8.00 to claim the world’s oldest cup competition.