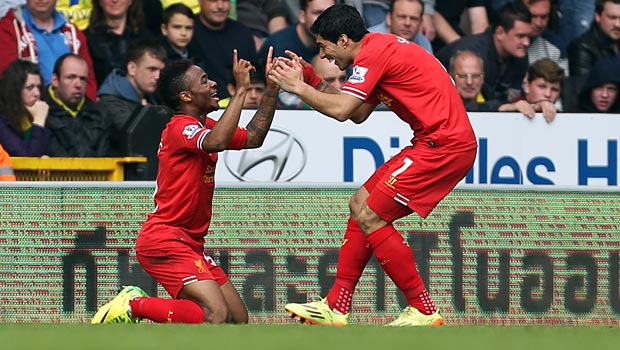 Liverpool striker Luis Suarez has ruled out the possibility of moving to Real Madrid after claiming the Premier League is ‘the best in the world’.

Suarez almost left Anfield last summer when Arsenal made at least one bid to sign him, but the Reds refused all offers and the striker has gone on to fire home 30 goals.

Liverpool are on course to win their first Premier League title in over 20 years, and Suarez has also penned a bumper new deal, but that is not stopping speculation suggesting he could still leave for Madrid.

However, Suarez says that will not happen as England is the only place to be.

“For me the Premier League is the best in the world,” he said.

“You will see Norwich, Cardiff, Crystal Palace against any big team and you will see crowded stadiums, people living the game with passion.

“In that moment you realise that, in the Premier League, you cannot relax at any time. All the games are played at the top level and that is the beauty of it.”

It is a remarkable turnaround as Suarez said the main reason for wanting out of Anfield 12 months ago, was to get away from England and the press after being hit with a 10-game ban for biting Chelsea’s Branislav Ivanovic.

However he is now happier than ever as Liverpool close in on the title, something he never expected.

“To win the title would be something that no-one would believe,” he added.

“The truth is we’re surprised ourselves at how well we’re playing. We have good players who are demonstrating why they are playing for Liverpool.

“It would be something amazing because of the investment made by Chelsea, Manchester City and Arsenal. Even Tottenham have spent over £100m.

“We, with so little investment, are in this position. It would be incredible.”