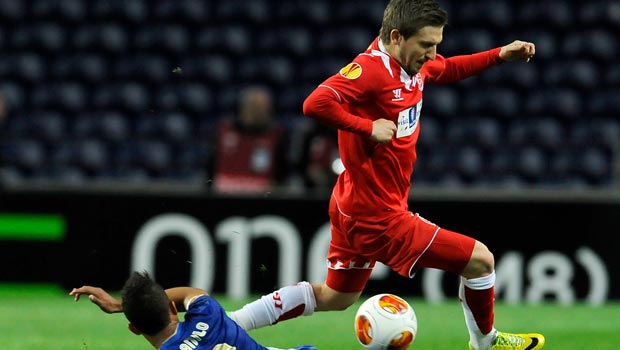 Sevilla have one foot in the Europa League final following a 2-0 victory over Primera Division rivals Valencia, while Benfica edged out Juventus 2-1 in the other semi-final.

Sevilla, who won the UEFA Cup in 2006 and 2007, were favourites going into the game following an impressive run of form in La Liga, and two goals in three first-half minutes put them in control.

Sevilla had further chances to increase their lead, while Eduardo Vargas missed a great chance to grab a crucial away goal, meaning Juan Antonio Pizzi’s side now have it all to do to turn the tie around in the second leg.

Meanwhile, in the other semi-final, Benfica have a slight advantage after substitute Lima struck six minutes from full-time in Lisbon.

Juventus looked on course to take a 1-1 draw back to Turin after Carlos Tevez struck in the 73rd minute to cancel out Ezequiel Garay’s third minute opener.

However the newly-crowned Portuguese champions grabbed a late winner through Lima, who blasted home from the edge of the area.

Despite trailing Benfica, Juventus are now 2.25 favourites to go on and win the Europa League, with Sevilla priced at 3.20.

Benfica are just behind them at 3.30, with Valencia the big outsiders at 15.00 following their 2-0 defeat against Sevilla.