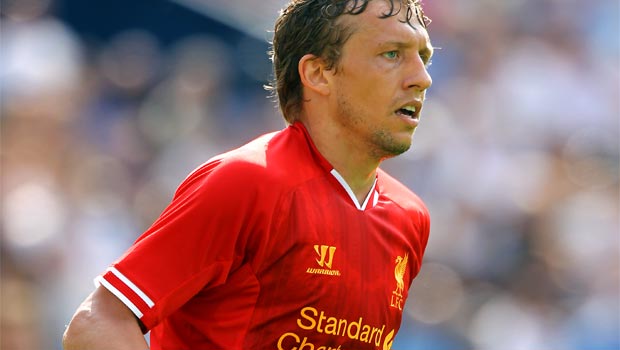 Liverpool midfielder Lucas Leiva’s injury problems have continued after the Brazilian was ruled out for up to two months with knee ligament damage.

The 27-year-old suffered the setback during Saturday’s 2-2 draw against Aston Villa at Anfield as the Reds maintained their push for Champions League football next season.

Fourth-placed Liverpool are now eight points behind league leaders Arsenal and maintaining their position in the top four will be boss Brendan Rodgers’ priority over the course of the next 16 games.

But the Northern Irishman will have to do it without Lucas for up to eight weeks which piles the pressure on the likes of captain Steven Gerrard, Jordan Henderson and Philippe Coutinho.

Liverpool return to league action against cross-city rivals Everton on Tuesday, January 28 and they are 1.73 for a home win, but beforehand the Reds travel to Bournemouth on Saturday for an FA Cup fourth-round tie.

This term Rodgers feels his players have more belief in themselves as they look to end their exile from top-level European competition.

The former Swansea boss told his club’s website: “As we’ve been able to work more, this season has been very important because we’ve been able to do a lot of work on the training field – and a lot more work behind the scenes on that mental fitness, which is important for any team.

“I think you’ve seen the benefits of that in the confidence and belief of the players, especially if we’re ever down in games or in difficult moments. We’ve definitely improved in that aspect.”

Whether or not Lucas’s injury lay-off forces Rodgers into the transfer market with more vigour this month remains to be seen, but the boss will be as mindful of making panic buys as he is of ensuring enough cover in midfield.