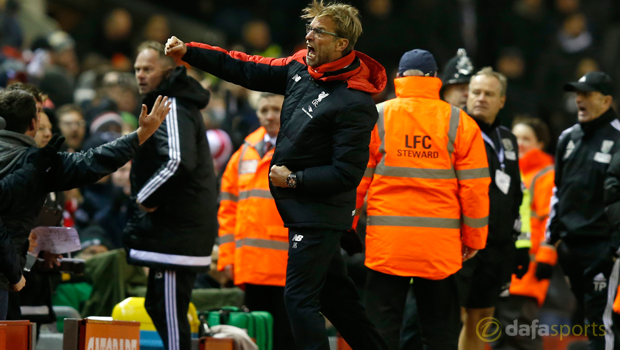 Jurgen Klopp paid tribute to the Liverpool fans for sticking with their team in the 2-2 draw with West Brom at Anfield.

The Reds needed a deflected stoppage-time goal from Divock Origi to rescue a point against Tony Pulis’ determined Baggies side and Klopp felt the supporters had played their part.

The Liverpool manager took to the field and made a point of acknowledging the Kop with his players after the game and he said it was the best atmosphere since he took over from Brendan Rodgers.

The ex-Borussia Dortmund boss has in the past been critical of a nervousness he feels permeates the ground when Liverpool are struggling.

“It was the best atmosphere since I’ve been here, it was great. People were disappointed or frustrated but they didn’t let us feel it. They saw the lads tried everything,” said Klopp.

Klopp said it had not been “a friendly game” and he was clearly irked by the physical intensity of some of West Brom’s challenges.

He insisted however that it was important his team did not lose the game in such circumstances.

He added: “It was difficult, but we made a good game. We created chances, we created a perfect goal then we conceded these two, but at the end a draw I can live with.

“Maybe this was a very special moment for us to strike back in this way against such a team.”

Both of the visitors’ goals came from corner kicks and Klopp joked that his players will be busy defending set pieces in training this week as a result.

“We had a few moments where we were not good, but they were only set-plays. The guys next week will be only defending set-plays! If we can do this, maybe we can win,” Klopp said.