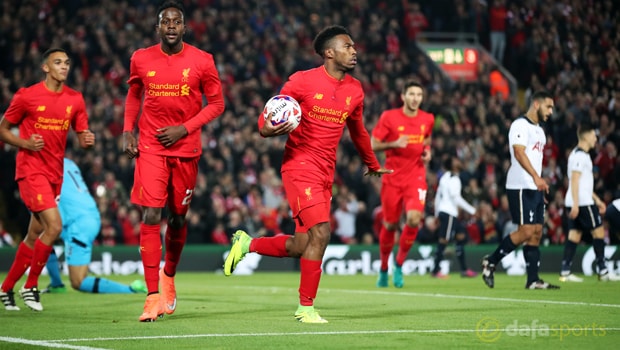 The England international has found first-team opportunities difficult to come by of late, as he has started just four Premier League matches so far this season, but he reminded everyone of his qualities on Tuesday, by scoring both Liverpool goals.

After the match Klopp had nothing but praise for the 27-year-old, who will now be hoping to earn a starting-birth for Saturday’s league clash with Crystal Palace at Selhurst Park. “It was good, he did what he had to do, and it was brilliant.

He could have scored three or four, but it was really good. That’s his real strength and he showed it again.” Klopp told Sky Sports.

The German coach had changed his entire starting line-up for the cup clash, but he was delighted with the overall performance of his side, as they progressed through to the quarter-finals of the competition for a third successive season.

“But overall summary is very positive. A deserved win, a big number of chances and a wonderful Tottenham goalkeeper.

All good, and entertaining for the people.” Liverpool are now unbeaten in their last 10 matches in all competitions, and they will be looking to continue that run when they take on Palace this weekend.