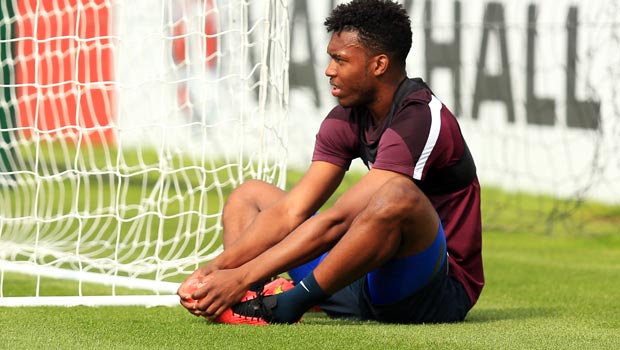 Liverpool boss Brendan Rodgers has criticised England’s handling of Daniel Sturridge after the striker was ruled out for up to three weeks.

Sturridge, 25, suffered a thigh strain while training with England last week and missed the Three Lions’ 2-0 Euro 2016 qualifying win over Switzerland on Monday.

Rodgers, who will now rely on Mario Balotelli against Aston Villa on Saturday and Ludogorets in the Champions League next week, felt Sturridge’s injury could have been prevented.

Sturridge, who has played the full 90 minutes in each of Liverpool’s three league games this season, was on for 89 minutes of England’s friendly against Norway on September 3.

He suffered his injury in a training session 36 hours after the match at Wembley, which England won 1-0, and that has irked Rodgers.
“I think clubs work differently at times to international teams,” said the Liverpool manager.

“When we look at our players here we look at them individually in terms of what their needs are.

“Fast players would have a second day recovery while other players can work on that day.

“When you are that type of quick player like Daniel Sturridge, Raheem Sterling and boys like Danny Welbeck, you need to recover them.”

Liverpool, without Sturridge, remain odds-on favourites to beat Villa on Saturday – despite drawing 2-2 with Paul Lambert’s then struggling side in the corresponding clash last season.

Villa are 10.62 underdogs to claim a shock win with a repeat of last season’s draw available at 5.49 while Liverpool are 1.26 to win in the 1X2 betting.

A repeat of that 2-2 scoreline is a tempting 25.0 in the Correct Score market.