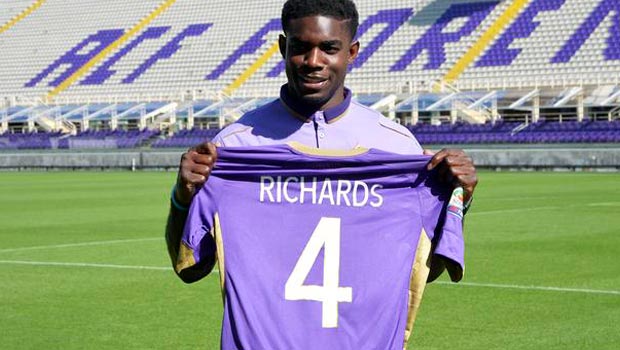 Micah Richards has explained why he turned down a new contract at Manchester City to sign with Fiorentina as he prepares to make his debut for La Viola against Genoa on Sunday.

The 26-year-old defender stunned City fans when he jetted over to Florence on transfer deadline day to complete the move to the Serie A club on an initial season-long loan deal – ending a long association with the Blues.

But the former England international can’t wait to get started in Italy – as he told reporters at his official media presentation on Thursday.

“I have been a player 12 years at City. In the past year, 18 months, I have not played as much,” said Richards.

“I had other offers, but the project at Fiorentina was very impressive. I believe that I can help us to achieve our goals, together with my team-mates.”

Richards revealed he chatted to now former City team-mates Stevan Jovetic, Matija Nastasic and Stefan Savic about the club before heading to Florence.

“I spoke with JoJo, Savic and Nastasic and they told me wonderful things about Fiorentina and Florence,” he added.
“As soon as I arrived I realised that they were right, the atmosphere is perfect to do well.

Richards admits the form of Pablo Zabaleta in keeping him out of the City side also played a part in his decision to leave the Etihad Stadium.

“As you know, I had a serious knee injury. When I returned, Zabaleta had taken over my starting spot. I would have liked to have continued the adventure with City, I was also offered a renewal, but my objective was to try a new adventure in another European League.

“It was frustrating to stay on the sidelines. Zabaleta has played very well in recent years.

“With Roberto Mancini there was a lot of rotation with the full-backs, whilst with the new coach there was less space and for this reason I decided to leave.”

Fiorentina will be looking to bounce back from a 2-0 opening-round defeat to Roma in Serie A this weekend when they take on Genoa at the Stadio Artemio Franchi.

La Viola are 1.53 favourites to clinch the home win with the draw available at 3.85 and Genoa are 6.38 to pull off a shock victory.

This is a fixture that has seen plenty of goals in the past two seasons with 18 scored in the last three meetings between the sides in Serie A.

Alberto Aquilani scored a hat-trick in January’s 3-3 draw with 4-6 goals priced up at 3.10 in the Total Goal market.