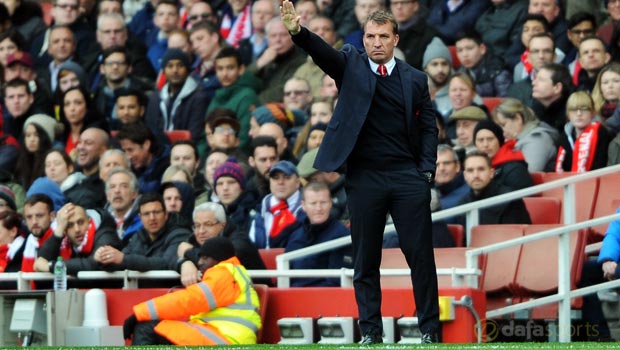 Liverpool manager Brendan Rodgers says his team’s hopes of finishing in the top four are all but over following Saturday’s 4-1 defeat at Arsenal.

The Reds are seven points off fourth-placed Manchester City after yet another damaging defeat, Rodgers’ men having been beaten by Manchester United in their previous game before the international break.

The Gunners were able to put another dent in Liverpool’s Champions League hopes as they put the visitors to the sword at the Emirates Stadium, Hector Bellerin, Mesut Ozil, Alexis Sanchez and Olivier Giroud doing the damage.

Jordan Henderson was able to pull one back for the Merseysiders from the penalty spot before the Reds misery was compounded by Emre Can’s sending-off late on.

The defeat leaves Liverpool with a mountain to climb in the remaining seven games if they are to avoid missing out on the Champions League.

Having been title contenders last season before a late slip-up handed Manchester City the title, this term has been a major disappointment for the Anfield outfit.

Rodgers says the FA Cup is now the priority for the Reds, conceding the fight for fourth is all but over for his men.

“I very much doubt we’ll be in the top four come the end of the season,” said Rodgers after the 4-1 loss at Arsenal.

“There’s too much ground to make up – that’s the realistic view from me.

“Now, we must really focus on the FA Cup and that has got to be very, very important for us.”

Liverpool must now pick themselves up for a crunch FA Cup quarter-final replay with Blackburn on Wednesday.