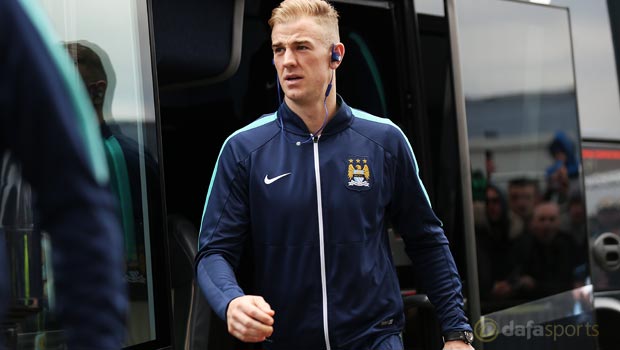 Manchester City goalkeeper Joe Hart says there is no reason why the defending champions should not end the season strongly, given that the Premier League is now their only focus.

The Citizens had to sit and watch their title rivals pick up three points on Saturday as Chelsea, Manchester United and Arsenal all won, leaving City in fourth and nine points off first.

Manuel Pellegrini’s men get their chance to respond on Monday night when they travel to take on Crystal Palace, a game they must win if they are to keep their slim hopes alive.

With City out of the Champions League and FA Cup, the race for the Premier League title is the club’s only remaining chance of silverware.

The outcome of City’s quest to retain the championship could also decide the fate of Pellegrini’s reign as manager, with speculation suggesting he will leave if they do not finish the season atop the standings.

Hart has now issued a rallying cry heading into the final eight games of the season, insisting the team are well-rested and determined to end the campaign on a high.

“We’ve got some massive games,” the England goalkeeper said. “Eight big [league] games to reach a level that we need to reach.

“We’ve not necessarily done that all season but we feel we are in the right place now. We have a lot of rest time and there are no excuses. Everyone is fit and ready to go.”

Hart admits City have not been good enough for the majority of the season but says they have not given up on trying to put right previous wrongs, having had to come from behind late on to win their two previous Premier League titles.

“We like to do it a different way. We’ve not necessarily reached the standard week-in week-out that we wanted to but the beauty of football is that you get another chance and that starts on Monday,” he added.

“We’ve proved it and the fans have proved it – we never give up. That is one thing that is part of Manchester City that we’ve taken with us from the olden days. We’ll never give up while anything is possible. We’ll go for it.”