Posted by Vincent Henderson on February 3, 2015 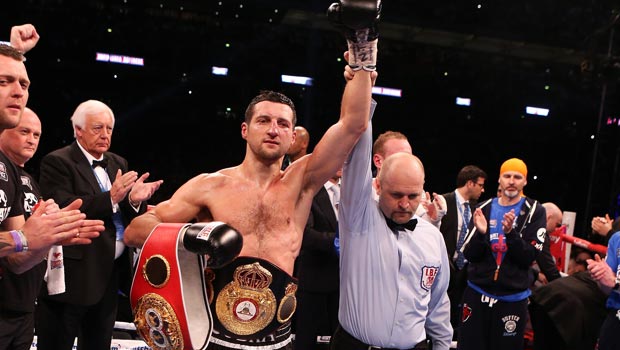 Carl Froch has opted to relinquish his IBF super-middleweight title amid continuing uncertainty about his future in boxing.

‘The Cobra’ had been scheduled to make his first appearance in the ring since knocking out George Groves last May at Wembley against Julio Chavez Jnr in March.

However, the Nottingham-based fighter was forced to pull out of the Las Vegas bout with an elbow injury.

That left him needing to face the mandatory challenger for his IBF belt, James DeGale, before he could think about rescheduling his contest with Chavez.

Rather than face his fellow Brit, Froch has decided to let go of his IBF world title, although he claims he could meet the Olympic gold medallist later in the year should he claim the strap.

“It’s been a frustrating couple of weeks with terms agreed for the Chavez fight only for me to be unable to proceed in camp due to injury,” said Froch, who will retain his WBA belt.

“I know what it’s like to wait for a shot and I didn’t want to hold James up in fighting for a world title.

“James is a great young fighter and I hope he can go out and win that title and, who knows, we may even meet later in the year.”

Since pulling out of the fight with Chavez, Froch has discussed retiring from boxing if he cannot get a fight scheduled in Las Vegas this year.

Meanwhile, DeGale has now been told he will face American Andre Dirrell for the IBF belt in a bout in April.

Dirrell, the 2004 Olympic bronze medallist, has just one defeat to his name in his 25-fight professional career, losing a split decision to Froch in 2009.

Should DeGale emerge victorious he could either face Froch later in the year, should the Cobra still be active, or old adversary George Groves, who beat DeGale on points in 2011.