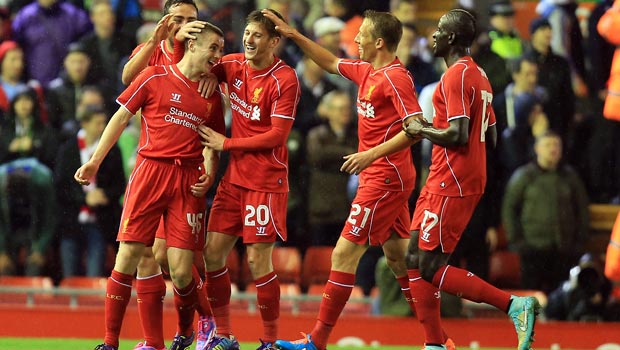 Liverpool boss Brendan Rodgers has hailed his young side’s character and determination after they reached the fourth round of the Capital One Cup after beating Middlesbrough on penalties.

After 120 minutes neither side could be separated with the score locked at 2-2 after an entertaining game at Anfield and penalty kicks were needed to separate the two teams.

Both Patrick Bamford and Raheem Sterling missed early on but the quality from there increased and 30 spot-kicks were needed in the end.

Liverpool eventually won 14-13 on penalties after Albert Adomah missed and Rodgers insists it was a great result for his young side.

The Reds, 26.00 to win the Premier League, fielded a number of youngsters in their team including Jordan Rossiter, who scored in the first 10 minutes, and Rodgers admitted after the game he was delighted to reach the next round.

He told Sky Sports: “It was very important. You can see how happy the players are. They are competitive players, they want to win in every competition.

“Tonight, a lot of the players haven’t played a great deal. Jose Enrique, I thought, was outstanding, he got through the whole game and extra-time and showed good composure on his penalty.

“We’re obviously very pleased to get through after being in the lead and giving away poor goals, to be honest. At the moment we’re making too many mistakes, but I can’t fault the character and the mentality of the players because they kept going.

“We’re all very happy. We’re in the hat for the next round, that’s all we want.”