Posted by OLADIPUPO MOJEED on December 23, 2021 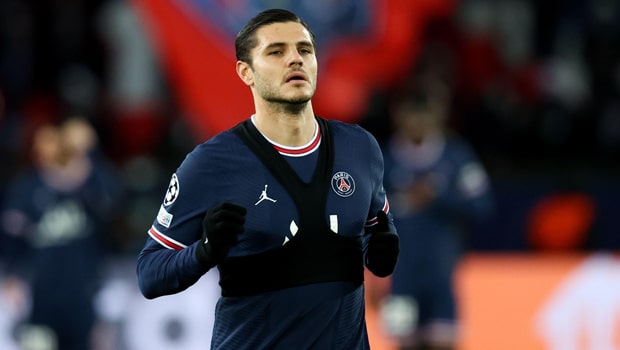 A late striker from Mauro Icardi secured a 1-`1 draw for PSG against Lorient in the last match of the year.

The French Ligue 1 will go on Christmas break, and that midweek games become the last of the year.

Lorient will take solace because the game finally ends their four-game losing streak. They were almost about securing a famous win before Icardi spoiled the show.

The visitors got back on level terms from a great bit of wing play from Achraf Hakimi, who gets to the byline. The Morrocan defender dinked in a teasing cross towards Mauro Icardi, who sent a downward header into the net.

Before the equalizer, Sergio Ramos was given the marching order after receiving his second yellow of the game.

The Spaniard received the first red card of his PSG career for a high boot a few moments ago. He was then quickly shown a second for cynically blocking Terem Moffi as he looked to sprint towards the goal.

The host opened the goals account five minutes before halftime when Enzo Le Fee played a neat lay-off to Thomas Monconduit just outside the area. Monconduit then blasted the ball beyond Keylor Navas into the top corner and in off the bar.

PSG began to look for the equalizer as Icardi and Messi hit the post, but they have been a constant threat on the counterattack.

With these results, it means Mauricio Pochettino’s remains unbeaten since October. The win also opened up a pretty emphatic 16-point lead at the top going into the Christmas break.

Their relentless attacking football that sees the visitors had over 70 percent were eventually rewarded two minutes to the end of regulation time. PSG missed so many chances.

With these results, Mauricio Pochettino’s remains unbeaten since October.

PSG is currently sitting comfortably on the summit of the log, leading Nice with 13 points. Marseille also shares the same spot with Nice while completing the top four with 31 points.