Posted by OLADIPUPO MOJEED on January 4, 2022 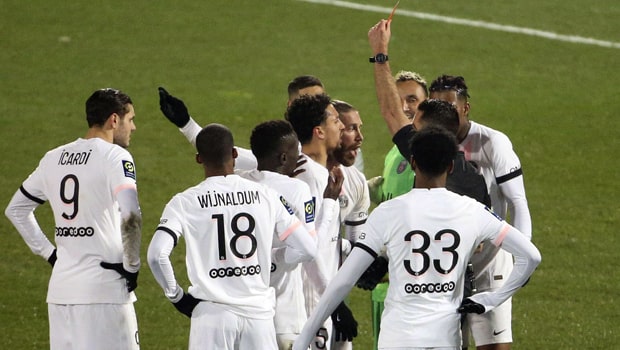 Paris Saint-Germain defender Sergio Ramos Check will have to wait before playing his first match in 2022.

Due to his red card, the Spanish defender won’t be part of the resumption of Ligue 1 Uber Eats action in Round 20 as the capital club take on Lyon on Sunday.

Meanwhile, Ramos is not the only player that won’t feature in the matchday 20 games. Three other players were given the marching orders in Ligue 1 Uber Eats Round 19 action before the winter break. They have all known their penalties as announced by the LFP’s Disciplinary Committee.

The governing body has imposed a one-match ban on Ramos, who was red-carded in the 1-1 draw in Lorient.

Others include ESTAC Troyes goalkeeper Jessy Moulin, who was sent off from the substitute bench against Brest. He will serve a match ban plus another game suspended.

Marseille striker Bamba Dieng and Reims central defender Andrew Gravillon were the remaining two. The duo got sent off during their meeting in Round 19 that ended 1-1.

Dieng was handed a three-match ban (plus one suspended), while Gravillon will serve a one-match ban.

Meanwhile, the other six players will also miss the week 20 clash over the accumulation of yellow cards. They will all miss one game each.

These players have been booked thrice in a period comprising ten official games or by revocation of a suspended ban.

This latest development means PSG will be without the service of two top stars in Lionel Messi and Neymar. The former had tested positive for COVID-19, and he is self-isolating in Argentina while Neymar enjoys an extended stay in Brazil as he continues his recovery from an ankle injury.

Thus, Kylian Mbappé led the line as PSG plays the fourth division amateurs Vannes OC in the Coupe de France round of 32 on Monday evening.

Mauricio Pochettino’s Paris Saint-Germain has been battling with COVID that has cut a swathe through the squad. Other players isolating include Juan Bernat, Sergio Rico and most likely Danilo Pereira (who had symptoms on Sunday).

Also, the Ligue 1 giants will be without Idrissa Gueye, Abdou Diallo (both Senegal) and Achraf Hakimi (Morocco), which will be featuring in the African Nations Cup which commences January 9.