Posted by OLADIPUPO MOJEED on December 8, 2021 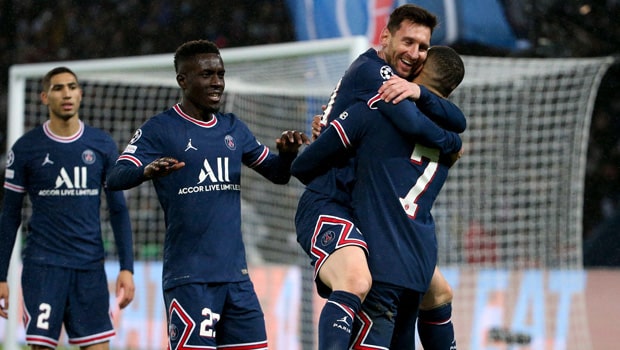 PSG has finished their group A game with a 4-1 win over Club Brugge as Lionel Messi and Kylian Mbappe were on target.

The Ligue 1 giant finished as runners-up behind Manchester City that lost their own last game to the German side, Leipzig FC.

In the game, Mbappe set a new record to become the youngest player to have scored 31 goals in the Champions League

The result also leaves their Belgian opponent finish bottom of the group. Leipzig will be demoted to the Europa League while Bruges goes back to concentrate on their domestic campaign.

Mbappe got his first goal of the match after only 72 seconds. The talisman fired the ball into the bottom corner when goalkeeper Simon Mignolet palmed a cross into his path.

The second came after he volleyed in from Angel di Maria’s clipped pass soon after.

Mats Rits helped the visitors reduce the deficit when beating goalkeeper Gianluigi Donnarumma with a slotted finish. The result didn’t reflect the performance of the visitors who created several good chances.

With 31 goals in Europe’s elite competition, Mbappe has passed the 30-goal landmark at the age of 22 years and 352 days to surpass Messi, who was the record holder at  23 years and 131 days.

Apart from scoring, Mbappe also made an assist for the man whose record he had just broken.

Messi’s goal was a classic Messi dribble and finish after scampering to the edge of the Bruges box; Messi shifted the ball onto his left foot and curled into the corner. This makes it a goal against a 38th different side in the competition – a joint record he holds alongside Cristiano Ronaldo.

The world footballer of the year soon grabbed his second after Rits had reduced the scoreline for the Belgian side. He slotted in from the spot after being fouled.