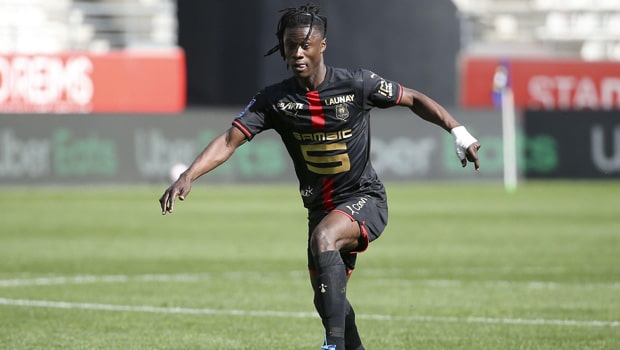 Reports from France have said that Ligue 1 giant Paris Saint-Germaine Sunday held talks with Rennes on Sunday for Eduardo Camavinga.

According to L’Équipe, PSG Sporting Director Leonardo used the occasion of the Ligue 1 clash with the club to speak with the opposition’s board about the possibility of signing 18-year-old French international this summer.

Camavinga has been one of the standout talents in the league after breaking into the rank of the senior team from Rennes academy.

The 18-year-old’s deal expires June 2022. After recently signing up with Stellar Sports agency, Camavinga has rejected a contract extension offer, giving the chance to secure a move away from the Brittany side as quickly as possible.

Rennes had placed an €80m price tag on him after taking the club to the Champions League last summer. With a year left on his current deal, Rennes will likely not turn down a €30m plus bonuses fee, which seems more realistic, given the current tricky economic context.

Although PSG is not the only club on his radar, Bundesliga champions Bayern Munich are also aiming not to pay more than €25m.

Rennes manager Bruno Genesio wants the talented midfielder to extend his stay, having done the same for Corentin Tolisso whilst he was in charge of Lyon. The French midfielder was on the verge of joining Napoli in 2016 but was convinced to play for one more season before joining  Bayern Munich for €41.5m a year later. But it’s looking like Camavinga has already made up his mind.

Other monitoring the situation include Real Madrid and Arsenal.

Meanwhile, he is also dreaming of being part of France’s squad for Euro 2021 this summer despite an ‘average season’ with the club.

Therefore his future is expected to be addressed after the competition. He will be fighting for the midfield spot with the likes of Paul Pogba, Andrien Rabiot, Tolisso, and Ngolo Kante.