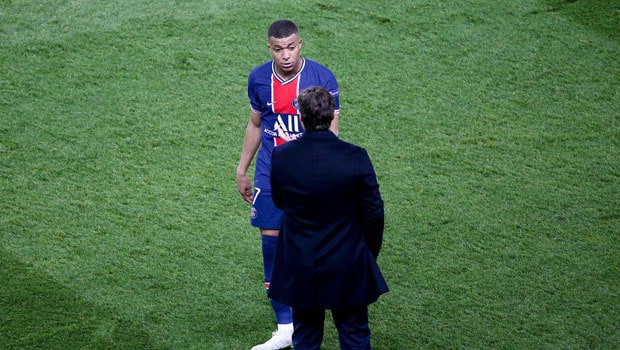 PSG star player Kylian Mbappé could miss the visit to Manchester City for the second leg of the UEFA Champions League semi-final.

Mbappe, who played 90 minutes of the first leg, which the Paris team lost 1-2 to the English leaders, missed the Sunday training session. This has made fears mount over his availability against the noisy neighbours in England.

According to L’Équipe, what’s unclear is if his absence from this training session was merely precautionary.

It could be recalled that the world cup winner had suffered a knock in the 1st leg to this right leg. The reports, which is unsure if the medical staff is hiding something more serious, said Mbappé would be traveling with the Ligue 1 champions for the Man City clash slated for tonight.

Meanwhile, PSG manager Mauricio Ponchentino had assured that Mbappe would be available for the game.

The match allows Les Parisien to make a history of being the first French club to play two straight Champions League finals. They had lost 1-0 to Bayern Munich in last season’s final. The only hurdle in their front is to cancel out the 1-2 home loss against City, guaranteeing them a meeting in the final against either Chelsea or Real Madrid.

Speaking ahead of the clash, PSG right-back Alessandro Florenzi said it is better to think mentally of the match, adding that it is only the preparation for it that matters.

The 30-year-old defender, in an interview with the club’s official website, said for his team to win the decisive match, there is no need to think about it from 3, 4 days before so that they won’t arrive in England exhausted.

While noting that there are matches that prepare themselves, he said the Man City clash is one of them.

It is also an opportunity for Man City to qualify for their first Champions League final.