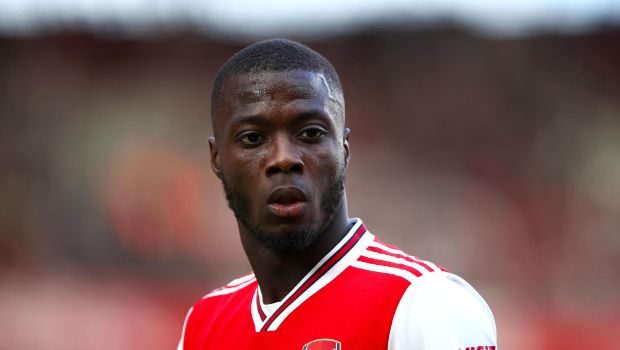 The Ivorian will like a return to Ligue 1, where he had established himself before becoming a record signing for the Gunners.

It was gathered that he had held a discussion with the club and might secure a move away from the Emirate after falling out of the pecking order.

However, if the Gunners winger failed to secure the move, Man United winger Amad Diallo is an alternative. It means if they fail to agree on terms with the £72m Gunners record signing, they might go for Diallo.

Pepe had three seasons ago left Lille for Arsenal for £72million, a club record fee.

Mikel Arteta seems not to have the 27-year-old who has fallen down the pecking order at the Emirates in recent months in his plans. The Spaniard now prefers starting Bukayo Saka, Gabriel Jesus, and Gabriel Martinelli in his attack, and that has proven to be formidable so far in a season where Arsenal is topping the league after three straight wins.

Pepe, who was left out of Arsenal’s match-day squad to face Bournemouth, is reported to have held further talks over a move to French side Nice on Saturday.

Since Sir Jim Ratcliffe, Nice’s owner, had expressed interest in signing the winger is keen to bring the winger back to France this summer.

Should Arteta eventually bring a winger to the club during the current transfer window after missing out on Raphinha earlier in the summer, Pepe is likely to leave.
This means any potential arrivals depend on Pepe leaving the club.

When speaking about Pepe’s Arsenal future on Friday, Arteta said there will be communication we always do when it’s the right moment.

‘We discussed that we have a big squad, and we’ve made some decisions and allowed some players to leave.

‘Until the end of the window, anything is possible with any player,’ he added.