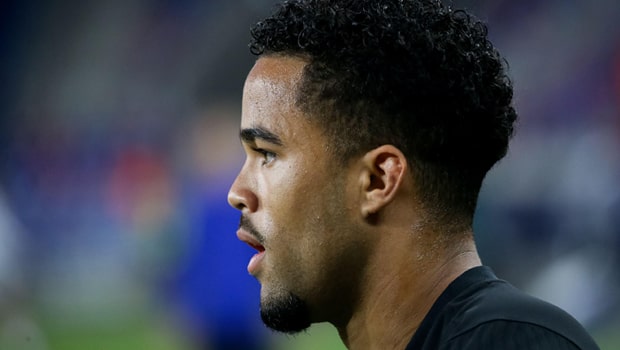 AS Roma has announced the transfer of Justin Kluivert to Ligue 1 club, OGC Nice. The exit of the Netherland attacker is due to the aim of the new manager, Jose Mourinho, to whittle down his squad of players who are not part of the project.

Some of AS Roma players returning from loan deals last season include Pau Lopez and Cengiz Under to Olympique Marseille.

Finally, Kluivert has completed his move to Nice on a loan deal with an option to buy for the Ligue 1 side. Nice had beat competition from Lille.

Kluivert was on loan last season with  Bundesliga side RB Leipzig, scoring four goals in 27 games.

The 22-year-old striker, who is the son of former Milan striker Patrick Kluivert was bought from Ajaz Amsterdam for €17.25m in the summer of 2018, but he never really perform up to expectation at the Stadio Olimpico.

So far, he has played 68 competitive games for the Giallorossi jersey, scoring nine goals and providing ten assists.

In another completed deal, Hellas Verona goalkeeper Marco Silvestri has completed a move to Udinese. Benevento’s Lorenzo Montipò will replace the goalie.

The latest development was confirmed on the official Udinese TV channel after completing his medical and signed the three-year contract.

It was gathered that the Friulani paid circa €2.3m plus up to another €0.5m in add-ons to secure the signature of the  30-year-old.

Silvestri had been at the Stadio Bentegodi since 2017, after leaving Leeds United.

He becomes an immediate replacement for Udinese former goalie, Juan Musso, who joined Atalanta for a transfer fee of €20m.

He is therefore expected to continue his top performance for the team.