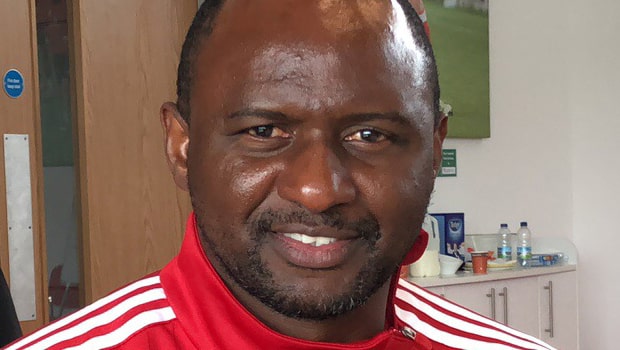 Ever since Patrick Vieira was appointed at the head coach of Nice, the motive of taking the French side to top spot has always been his main priority.

Vieira, who had an illustrious career as a player, replaced Lucien Favre after the Swiss poor run of form with the Nice side led to his dismissal.

However, with top players across Europe not known for having a good time as a manager as the case of former Manchester United player Gary Neville, Vieira has not disappointing on the top stage as he’s already making his mark.

Vieira, who had met a deteriorated Nice in his first season in charge, finished the season with Nice seventh on the log.

Patrick Vieira has however started to perform his magic on the Nice team this season as they’ve been having one of their best starts to a season.

Though it’s still early, the positivity and never say die attitude embedded in the team by Vieira is pushing them to punch above their weight.

The Nice team’s last qualification for a Champions League was during the 2016–17 season, a season which they qualified for the third round of the Elite Competition.

With the motives and philosophy of Patrick Vieira and his Nice team, it won’t be a surprise if they (Nice) qualify for the elite competition this season.

Vieira’s first managerial stint was awesome as he improved New York City’s position in the combined MLS standings in each of his years with the club, improving from 17th in 2015 to 4th in Vieira’s first season in 2016 and then to 2nd in 2017.

With this kind of amazing stat, it won’t be a surprise if Nice end up challenging for the Champions League spot as well as the French Ligue 1 title.

Nice currently sit third on the league standings, level on point with Angers. However, if Vieira and his lads can keep up with the Tempo in which they’ve started the season, they could be occupying a Champions League spot come the end of the Season.