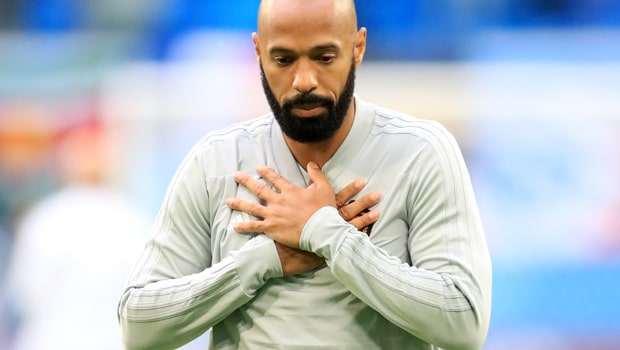 Thierry Henry will take his first steps in football management with Monaco, the same place he began his playing career.

The 41-year-old Frenchman has been appointed as head coach of the Ligue 1 outfit until June 2021.

Henry, who had been Belgium’s assistant manager, began his professional career at Monaco and helped them win the French title in 1997.

Earlier this week he was being touted as a potential candidate for the Aston Vila job, but the former Juventus, Arsenal, Barcelona and New York Red Bulls star is going back to where it all began.

Monaco are third from bottom in Ligue 1, with only one league win so far, and sacked manager Leonardo Jardim on Thursday.

Henry is the man they have turned to to revive them and he’s honoured and excited to be handed the reins in the principality.

“It seems like fate that I will begin my managerial career here,” said Henry.

“Monaco will always be close to my heart. I’m incredibly excited to be given this opportunity but now the hard work must begin.”

Monaco have won just once all season in all competitions. In Ligue 1 they have six points from nine games with five defeats and they have lost both games in the Champions League.

A World Cup winner with France in 1998, Henry helped add the European Championship two years later with Les Bleus, while he also claimed two Premier League titles and a pair of FA Cup wins at Arsenal and then helped Barcelona win the treble of La Liga, Copa del Rey and Champions League in 2008-09. Monaco feels he is a worthwhile risk.

“His knowledge of football, his passion for the game, his high standards and his commitment to our colours make his nomination a reality,” Monaco chief executive Vadim Vasilyev said.

“Thierry is both aware of the task ahead and eager to start his new job. He can count on our trust and all our support to bring a new dynamic to the team and carry out its mission.”