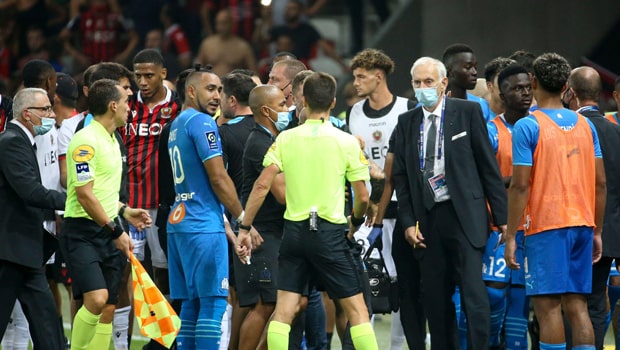 The organising body of the French Ligue 1, French Professional League (LFP) have summoned Nice and Marseille to a disciplinary hearing on Wednesday after their Ligue 1 match on Sunday was abandoned due to crowd trouble.

The week 3 clash played at Nice’s  home ground was abandoned in the 75th minute after Marseille players clashed with home fans. The reaction was due to missiles pelted at the visiting team. The fans later stormed onto the pitch.

The meele started when Marseille midfielder Dimitri Payet was struck by a bottle thrown by Nice supporters when he  wanted to take a corner. The midfielder retaliated by hurling the bottle back at them. This led to a full-scale brawl that made some of the fans rush onto the field.

Speaking with BFM TV, French Sports Minister Roxana Maracineanu said such fans should never be allowed to get onto the pitch.

He further described the fracas as the more regrettable given how sports venues had been empty for several months due to COVID-19 health protocols.  He added that it was insult for sport and football.

Also condemning the act was Christian Estrosi, the mayor for the city of Nice who said violence is unacceptable.

He this recommended sanctions from the French football league once those who were responsible for the trouble are fished out.

This is a huge setback for the french Ligue 1 that was hoping to win more viewers across the world following the arrival of six times world footballer of the year, Lionel Messi at Paris Saint-Germain.

The situation led players from both teams to retreat to the tunnel. Afterwards, play was held suspended for 90 minutes before referee Benoit Bastien declared the match abandoned.

Before the announcement, Nice players had returned to the pitch but Marseille’s line-up refused to join them. The fans’ trouble never reduced despite an appeal from Nice president Jean-Pierre Rivere over the stadium’s public address system during the delay. Since the angry Marseille players and staff refused to carry on, the game had to be abandoned. What is left to be known is if the remaining 15 minutes will be played at a later date

Explaining why they refused to continue despite a decision by the soccer authorities that play should resume,

However, Revere partially blamed Payet and his team mate Alvaro Gonzalez for the chaos due to their retaliation by hurling bottles back at Nice fans. He further accused Marseille staff of hitting some of the home players.

Benoit Payan, the mayor for the city of Marseille also backed his club’s decision not to resume the match, adding that he remains proud of them for not being prepared to take part in what he described as masquerade.