Leigh Griffiths eager to be involved against world champions Germany

Posted by Fred McKinley on September 6, 2015 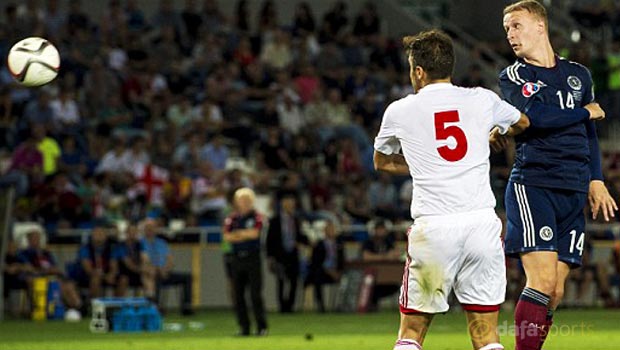 Celtic striker Leigh Griffiths admits he is desperate to be involved in Scotland’s vital Euro 2016 qualifier against world champions Germany at Hampden Park on Monday.

Griffiths is hoping former Parkhead boss Gordon Strachan will give him a chance to show what he can do, and the forward believes there is no reason why Scotland cannot get a positive result from the Group D clash.

Defeat to Georgia in Tbilisi on Friday means Scotland have slipped from third place after the Republic of Ireland beat Gibraltar 4-0 in Faro.

With just three games remaining, Scotland now desperately need to try and pick up something against Germany, who took over at the head of affairs courtesy of a 3-1 against Poland in Frankfurt on Friday.

Griffiths came on for the final 15 minutes against Georgia and hopes he will get another chance on Monday.

“I would love the chance to play,” said Griffiths. “It’s an honour to put a strip on for your country and I would love to get on.”

Germany are strong favourites to win at 1.44 but Griffiths knows Scotland can be a match for anyone on home soil.

“I don’t see why we can’t still beat Germany. It’s at Hampden Park and we have beaten the best there before.

“We got good results against France, Holland, Italy. A raw against Germany as well. I don’t see why we can’t get something on Monday,” he added.

The former Hibernian and Wolves man says Scotland must quickly forget the disappointment of losing to Georgia and focus on a strong finish to the campaign.

“We still have three games to play and nine points to play for. I still believe we have a realistic chance of winning them all,” he said.

Scotland are 7.50 to beat Germany at Hampden Park, with the draw available at 4.50.