Leigh Griffiths close to being No.1 for Scotland 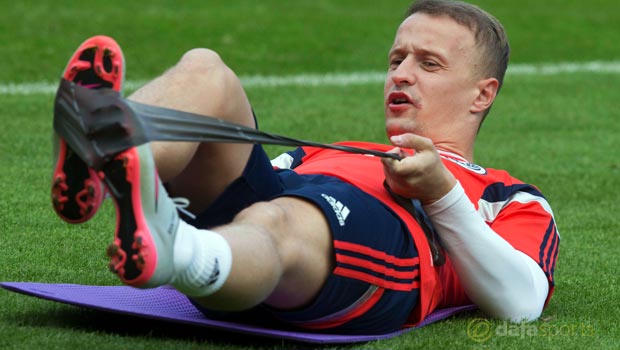 Celtic’s Leigh Griffiths is closing in on becoming a first choice striker for Scotland ahead of Sunderland’s misfiring hit-man Steven Fletcher.

Griffiths has already hit the back of the net five times in the Scottish Premier League this season as Celtic look to defend their crown and sit top of the SPL.

He will again be looking to get on the scoresheet in this weekend’s table-topping game against second placed Aberdeen.

Celtic are 1.85 to pick up the win at Pittodrie whilst the home side are 3.80 to get a victory and the draw is priced at 3.50, Ahead of the clash, pundit Neil McCann has claimed Griffiths should be ahead of Fletcher in the national side, with another pundit Stan Collymore going even further and claiming Fletcher is lucky to get into the squad, never mind the starting line up.

The Black Cats striker is under pressure in the national side after finding goals hard to come by but he has been backed by former Scotland’s assistant boss Mark McGhee.

He has leapt to Fletcher’s defence, telling the Scotsman: “If Fletcher could get more goals that would be great for him and great for us. But I don’t think we should get hung up on that because he does make a contribution.

“He will make a huge contribution without scoring goals, so we shouldn’t get too carried away.”

McGhee has warned that Griffiths is not too far away and he may well get the nod in the near future.

“Leigh is an option and has become more of an option this season,” he added. “We have been impressed with the work Celtic have done with Leigh. But at this point Gordon (Strachan) judged Fletcher is still ahead of him. But he is getting closer.”

Fletcher played the full 90 minutes for Scotland against world champions Germany on Monday night but failed to net as Gordon Strachan’s man suffered a 3-2 defeat.