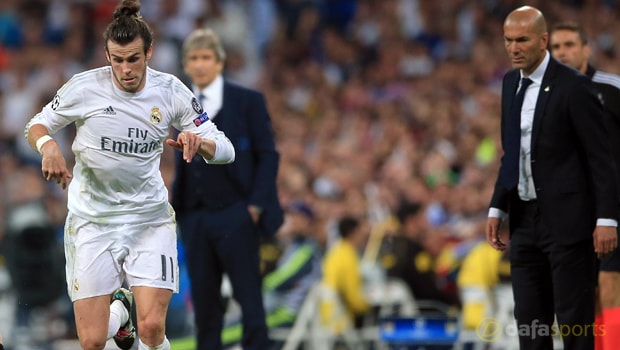 Real Madrid manager Zinedine Zidane described Gareth Bale as a ‘special’ player as he scored on his return from injury on Saturday.

The Wales international had been sidelined for 88 days after undergoing ankle surgery but Zidane handed him a cameo appearance off the bench against Espanyol.

Bale suffered the injury in a Champions League game against Sporting CP in November, but he looked in fine form as he scored the second goal in the 2-0 win.

Striker Alvaro Morata opened the scoring with a neat header in the first off before Bale fired the ball home after a trademark run when being thrown on for the last 20 minutes.

Speaking after the game, Zidane said: “I am happy for his return, but above all for him.

He wanted to be back with us, on the pitch again, to feel like a player. “Gareth is Gareth. We have just one Gareth. He is a special player, of course, different to the others.

But each one brings his grain of sand to the team. That is important.” While Bale grabbed the headlines, team-mate Cristiano Ronaldo failed to score for the second game in a row but Zidane insists he is not concerned.

He added: “We know he is like this. He always scores, so when he doesn’t we might see that [frustration]. He does not look anxious to me, he is fine, happy.

“This game was the same as against Napoli, he ran a lot for his team-mates. I am not concerned, he will make differences in key moments for us.”

Bale will be hoping he can prove his fitness for the club’s second-leg tie against Napoli on March 7.