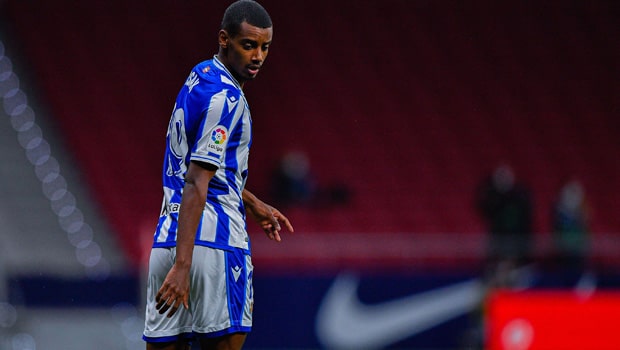 Real Sociedad’s Swedish forward Alexander Isak has called for calm among the Real Sociedad’s fans amid transfer talks linking him with a move away from the club.

The Swede has been impressive for Real Sociedad scoring 16 goals in 33 matches this season in La Liga. The 21-year-old joined Real Sociedad from Borussia Dortmund in 2019 and has been very impressive courting interests from elite clubs across Europe.

However, he said his objective is to finish the season on a high with one more game to play and UEFA Europa League places still to play for.

“[The fans] need to be calm, I am. My objective is to finish the season in the best way. There is one game remaining and I have said that I feel very good here. No one knows what will happen in the future. Neither you nor I. I take everything calmly. I have a contract with Real Sociedad and [returning after the summer] is the plan.” Isak said.

Isak also scored sixteen goals last season in the La Liga and is tied to Sociedad until 2024.

Real Sociedad will play Osasuna in the final game of the season away from home and need to win to be assured of their fifth position with Villarreal and Real Betis breathing down their neck.

They are in the fifth position with 59 points while Betis are in sixth with 58 points and Villareal in the seventh position.

The final round of matches to be played in the La Liga the weekend will see Atletico Madrid need just a win against Real Valladolid to secure the La Liga title.

Diego Simeone’s led side still leads the table with two points while Real Madrid follows in the second position and they play Granada at the Alfredo di Stefano Stadium and they would need a win and Atletico Madrid loss to win the league.