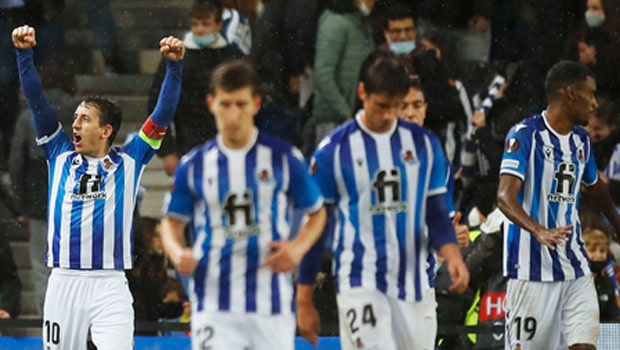 Spanish side Real Sociedad thrashed PSV Eindhoven 3-0 to secure qualification to the round of 16 of the 2021/22 UEFA Europa League.

Mikel Oyarzabal scored the goal that put La Real ahead two minutes before half-time from the penalty spot. The Real Sociedad captain then scored his second to double their lead two minutes after the hour. Ibrahim Sangare was sent off for PSV before Alexander Soerloth made it 3-0 in injury time to seal the win for Sociedad.

In Group B, Monaco drew 1-1 with Sturm Graz but qualified as group winners. The win puts Real Sociedad in second position, while PSV fails to progress.

Meanwhile, Leicester City’s first-half fightback in Italy was not enough to save them from a 3-2 defeat against Napoli in the UEFA Europa League on Thursday evening.

The Foxes needed to avoid a defeat and hope that the result in Warsaw between Legia and Spartak Moscow go their way.

However, they fell behind within the first five minutes when Ounas scored in the 4th minute before Elmas scored the first of his brace in the 24th minute.

Leicester had its squad struck by Covid infection and illness before the game, which saw up to seven players miss out on the trip to Naples.

However, they didn’t find goal scoring difficult, with Evans pulling one back in the 27th minute before Dewsbury-Hall scored a spectacular equalizer in the 33rd minute.

Napoli won the game early in the second half when Elmas scored in the 53rd minute to secure the victory on a rainy evening in Naples.

Napoli now moves into the next round while Leicester City will face a team from the Europa Conference League.

Also, in the game in Poland, Legia Warsaw lost a late stoppage-time penalty as Spartak Moscow topped the group with ten-point after a 1-0 victory.