Odegaard Pledges Not To Celebrate Goal Against Madrid 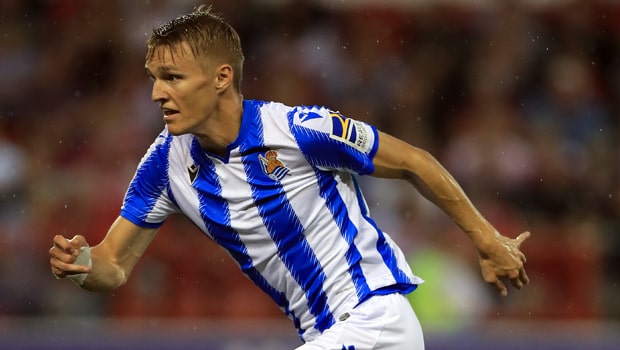 Norwegian and Real Madrid youngster, Martin Odegaard has revealed he would not jubilate should he find the back of the net against his parent club at the Santiago Bernabeu on Saturday.

The Los Blancos will welcome Real Sociedad to the Capital, in the Spanish La Liga in their first game after the international break with Odegaard a part of the side.

The 20-year old has been on loan at Real Sociedad and could spend up to two years at the club based on the deal signed.

Meanwhile, Odegaard is in a race against time to get fit from an Ankle problem if he is to play against Madrid, so far this season he has made 11 appearances for Sociedad and has been impressive.

According to the Norwegian international, he is close to a comeback as his ankle feels better after playing through pain in the game against Levante, stating that it was the right decision to not play after that which has helped.

He also shared the optimism of featuring at the Bernabeu at the weekend. He also revealed he has been putting in hard work in order to return soonest.

For the player, Playing against the Los Blancos is special, but to play every game is more important.

Odegaard’s loan contract could see him be with Sociedad for another season or return to the Capital after the current season should there be a need.

The player has revealed he will do all it takes, irrespective of the time it will take him to become a big success and a first-teamer at the club side.

Real Madrid are pegged at 1.40 to defeat Sociedad, while Sociedad are backed at 7.37.