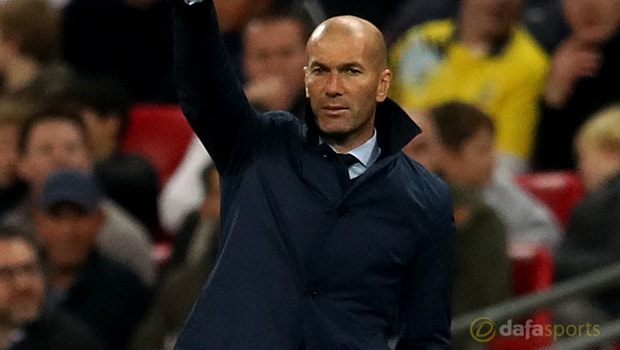 Zinedine Zidane was pleased with his much-changed Real Madrid side as they secured a 3-0 triumph over Numancia during the first-leg of their Copa del Rey round of 16 tie.

Los Blancos went into Thursday’s match at Los Pajaritos with an inexperienced line-up as only Dani Carvajal and Gareth Bale could be considered first-team regulars, with the latter making his first start since September following calf and thigh injuries.

Indeed it was Bale who opened the scoring from the penalty spot during the first-half, before another spot-kick, this time converted by Isco, made it 2-0.

Borja Mayoral’s late header rounded off the scoring for Real and Zidane was pleased with his side’s overall performance, particularly the players who had not seen much first-team football during the opening months of the season.

“This was not an easy place to come, they have been playing well,” Zidane said. “They made it tough for us, but we got a good result.

“Many of these are players who do not play so often. And they did very well, against a team who did not give up.

I am happy for the players who played a serious game and achieved something good.”

Real now seem almost certain to progress through to the quarter-finals of the competition, although Zidane is taking nothing for granted ahead of the return leg at the Bernabeu next Wednesday.

He added: “The tie is never over, we must play another serious game in the second leg.

In the second half we had some problems, above all when they were down to 10. But in general I am happy.”

Before the second-leg, Real must first turn their attention back to La Liga, as they face a tricky looking trip to the Balaidos to take on Celta Vigo on Sunday.