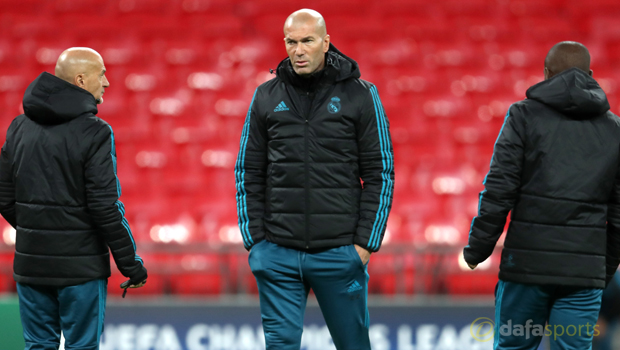 Manager Zinedine Zidane suggests it is “not normal” what Real Madrid are achieving in the Champions League after they reached a fourth final in five years.

The Spanish giants withstood a severe test from Bayern Munich in the semi-final second-leg at the Bernabeu on Tuesday evening to edge into the final 4-3 on aggregate.

They’ll travel to Kiev later this month hoping to win the Champions League for the third successive season, where Liverpool or Roma will be their opponents on May 26.

Zidane, a former player at Madrid, suggests their history marks them out in the competition and he knows his current side are adding a rich chapter. “We are still only in the final. We must be happy.

It’s not usual to be in a final for the third time in a row. That’s not normal,” said the former France international.

“It’s not just this team, it’s this club. It’s the history that comes from a long time ago. We are writing history like everyone else has done before us.

“Real Madrid never give up, even through difficulties like we had [against Bayern]. But we believe in what we do and we will fight to achieve things.” Madrid fell behind when Joshua Kimmich scored early on but Karim Benzema’s header restored parity on the night.

The French ace took advantage of a howler from Sven Ulreich just after half-time to make it 4-2 on aggregate. James Rodriguez, on loan from Real at Bayern, set up a grandstand finish but Madrid stopper Keylor Navas denied Corentin Tolisso and Thomas Muller’s late efforts in a frantic finale.

Under Zidane, Real Madrid have never been knocked out in the Champions League, progressing in all nine of their two-legged knockout ties as well as winning the two finals they have appeared in.