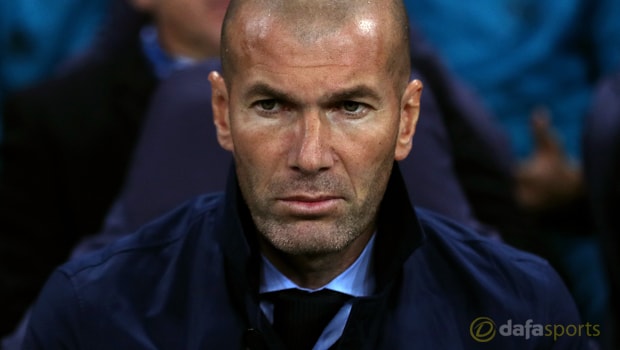 Zinedine Zidane has paid tribute to his Real Madrid team after they came from behind to win 2-1 against Bayern Munich in their Champions League semi-final first leg in Germany.

The two-time defending champions are chasing a remarkable hat-trick of Champions League titles this season and Madrid are now firmly on course to face either Liverpool or Roma next month in Kiev.

The Bundesliga side started strongly and hit the lead when full-back Joshua Kimmich caught Keylor Navas happing at his near post just before the half-hour.

Madrid were level on the stroke of half-time when left-back Marcelo volleyed home from 18-yards, totally against the run of play.

A mistake from Bayern’s Rafinha early in the second half allowed Marco Asensio, sent on by Zidane at the break, to give Real an advantage they would cling grimly to.

The French coach said his players had to ‘suffer’ and work without the ball, something he they did superbly well. “We had to suffer, but in the end we did it, we got an important result,” Zidane said.

“You can’t play a Champions League match without suffering. It’s a shame we lost Isco, but then Marco came on and made a difference. Everyone has to suffer and work without the ball.”

Karim Benzema and Mateo Kovacic were also summoned from the bench by Zidane at the Allianz Arena, with Gareth Bale left to look on. The Welshman had suggested in the build-up that it would be ‘an honour’ to play for Bayern in the future, but his current boss says he is far from done at the Bernabeu.

“My substitutions, today it was Karim and Marco. It will be a factor for us all season and I have to choose, we have very good players,” he added.

“There are still matches left and I can count on Gareth. Those who say that I don’t count on him don’t tell the truth.”

Real Madrid are favourites at 2.00 to win a third successive Champions League title, with Bayern now 7.50 to lift the cup after their defeat on home soil.