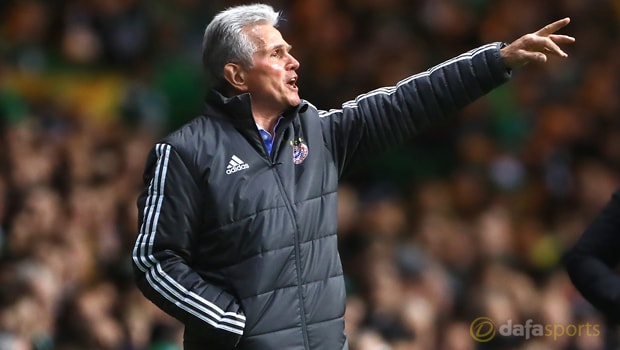 Bayern Munich boss Jupp Heynckes was at a loss to explain his teams’ home defeat to European champions Real Madrid, insisting they had ‘gifted ‘ the Spaniards a first-leg advantage.

The Bundesliga side made a strong start and led after half an hour when Joshua Kimmich lashed a shot past a napping Keylor Navas at his near post.

It could easily have been two had Franck Ribery not been let down by a poor touch when set to go one-on-one with the Madrid stopper minutes later. Bayern let their advantage slide on the cusp of half-time, failing to deal with a routine cross into the box before Marcelo volleyed home from 18-yards.

It got worse before the hour, Rafinha seeing his sideways pass intercepted as Lucas Vasquez drove forward and teed up substitute Marco Asensio to put the visitors in front. For Heynckes, the goals were of the nightmare variety.

“We went ahead, but there was a turning point with their first goal, which was a gift,” Heynckes said. “And their second was a gift too.

“We’ve rarely had so many chances to score and haven’t done so, but we didn’t know how to take advantage of our opportunities. Madrid were more effective.”

The coach has won the Champions League with both clubs in the past and he says Bayern should not have lost the first leg. They aren’t going to give up ahead of next week’s return game in the Bernabeu.

“Taken altogether I have to say I’ve rarely seen my team create so many chances in a Champions League match or a semi-final but fail to convert them. It’s very rare and it was unusual that a team like Real allowed so much [chances],” he added.

“But we failed to take our chances, we were too inefficient. We’ll try everything in Madrid to correct to result from the first leg.

“Madrid have a great advantage after the victory, but we lost undeservedly.”

Real Madrid are now favourites at 2.00 to hoist a third successive Champions League success while Bayern can be backed at 7.50 to lift the trophy in Kiev next month.