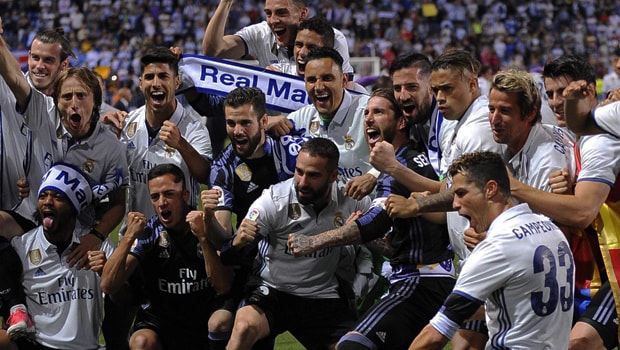 Goals from Cristiano Ronaldo and Karim Benzema saw them win 2-0 at Malaga to top the standings ahead of fierce rivals Barcelona.

They will hope it proves the first leg of a potential double, with June 3 seeing them take on Juventus in the final of the Champions League.

Victory in Cardiff will result in Real becoming the first team to retain the trophy in the modern era of the tournament.

Juve themselves wrapped up the Serie A title on Sunday and it is sure to be a tactical battle between Zidane and his counterpart Massimiliano Allegri.

The Frenchman has enjoyed a magnificent start to life as a manager and winning a second Champions League in as many years will only further cement his burgeoning reputation.

Zidane appeared downbeat after the victory at La Rosaleda but assured the assembled press that he was delighted, especially with the manner in which his players have performed this season.

“Happy? It may not seem like I am, but on the inside I’m very happy,” he said. “After 38 games, this is most difficult and beautiful League.

The Spanish League is the most beautiful for me and winning it with this match is incredible.

I’m very happy “The players? They’re spectacular, it’s to everyone’s credit but especially the players who have fought, the message has been that everyone’s important here and everyone’s been the key to our success.”