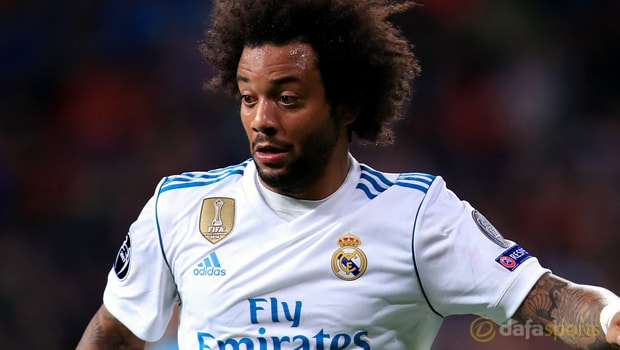 Villarreal won for the first time in their history at the Bernabeu on Saturday when Pablo Fornals’ late chip stunned the hosts for a 1-0 success.

Real occupy the fourth and final Champions League spot, now only one point above Villarreal.

They also find themselves ten points behind Atletico Madrid and eight off Valencia in second and third respectively.

Marcelo has been at Real for 11 years and won everything there is to offer and he admits this current situation is the lowest point in his time in the Spanish capital.

“It is one of the worst situations I’ve experienced here,” said Marcelo.

“We’re trying to play good football, to move the ball around and score goals but it’s not coming off.

“It is how it looks from the outside – we are sad, angry and we feel like we are sinking.”

The pressure is mounting on boss Zinedine Zidane, despite the fact the Frenchman has delivered two Champions League wins and a La Liga triumph in his two years at the helm.

Madrid had a La Liga season high of 28 shots at goal during the defeat to Villarreal and Zidane is struggling to fathom why things are not falling for them right now.

“We don’t deserve this, we think we played well but the ball just didn’t want to go in for us. I cannot explain why,” he said.

“It might be a mental aspect that is stopping us from winning. When we are on a bad run there are always negatives to pick up on.”

They are 2.20 to win the first leg at the Bernabeu and 9.00 to win a third successive European crown this season.