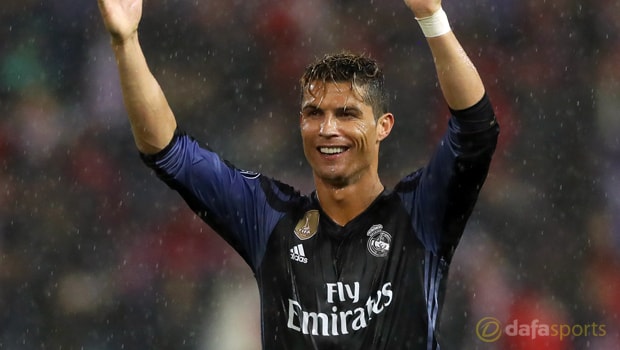 Cristiano Ronaldo has broken Jimmy Greaves’ all-time goalscoring record after he netted a brace during Real Madrid’s 4-1 victory at Celta Vigo on Wednesday.

The Portugal international scored a goal in each half to take his tally in Europe’s top-five leagues to 368, surpassing the previous record held by former England international Greaves.

The brace also helped Los Blancos move to within touching distance of a first La Liga title in five years, as they are now three points clear of Barcelona at the top of the standings and need just a point against Malaga on the final day to be assured of top-flight glory.

Ronaldo admitted after Wednesday’s match that he is delighted his goals have left Real on the verge of the league title, while he was also quick to praise the influence of his team-mates and coach Zinedine Zidane.

“The coach [Zinedine Zidane] and my team-mates have really helped me,” the 32-year-old said.

“We have a very good system, blending young players with experienced ones. Personally, I’m helping the team with my goals and I’m very happy about that.”

The former Manchester United ace is now fully focused on securing La Liga glory, although he knows his side will face a tough test against a Malaga team that have already beaten Barca on home soil this season.

“Winning is always the goal for this team and it’s what we do,” Ronaldo added.

“Malaga are a good team, but we are Real Madrid and we must show that we are better than them and that we want to be champions.”

Real are priced at 1.22 to win Sunday’s match, while Malaga are available at 11.00 to secure all three points at La Rosaleda and the draw is on offer at 7.00.