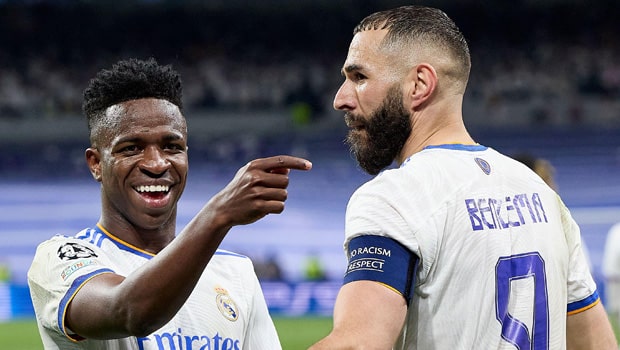 La Liga champions Real Madrid thrashed relegated Levante by six goals to zero on Thursday evening at the Santiago Bernabeu. Real Madrid, who were confirmed Champions two matchdays ago, lost their first match since becoming the Champions after a 1-0 loss to City rivals Atletico Madrid at the weekend.

The 1-0 defeat came as Carlo Ancelotti fielded a second-string side, but against Levante, on Thursday evening, Real Madrid returned to winning ways in big style.

Carlo Ancelotti returned Karim Benzema and Vinicius Junior into the starting eleven as well as some of the other first-teamers, including Thibaut Courtois, who was replaced by Ukrainian goalkeeper Andriy Lunin in the Madrid derby last weekend.

Real Madrid led in the 13th minute through Ferland Mendy, while Karim Benzema made it 2-0 six minutes later, and Rodrygo made it 3-0 in the 34th minute. French forward Karim Benzema made history with his goal after equalling Raul’s goal tally record for the Los Blancos.

Brazilian forward Vinicius Junior, who scored a hat-trick in the game, didn’t score his first goal of the game until the half-time.

It wasn’t until the 68 minutes before he added another before completing his hat-trick in the 83rd minute of the game as Real Madrid showed their strength ahead of the UEFA Champions League final match against Liverpool on the 20th of May in Paris.

Ancelotti, after the game, revealed that the team has switched full focus on the UEFA Champions League final but will still show commitment when playing league games.

“We’ve reached the end of the season well. But, we know there’s still time until the final, and we have to keep showing commitment in the matches before then. That’s what the team did today, as they worked very well and hard.” he said.

The Los Blancos’ last two games of the season include an away title Cadiz CF and a home game against Real Betis on the final day of the season.