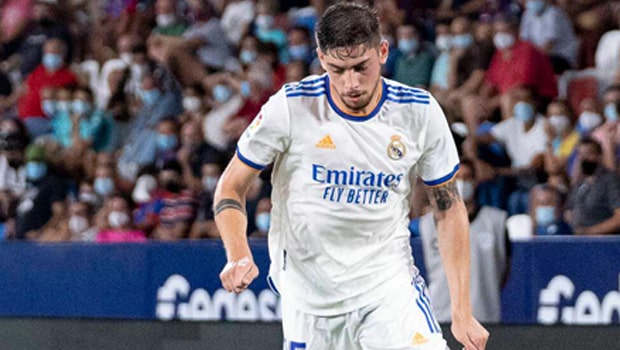 Uruguayan midfielder Federico Valverde has signed a new 2-year contract extension at Real Madrid which has pushed his release clause to €1 billion (£856m/$1.2bn).

Valverde’s contract was already till 2025 before singing for a further two years. The 23-year-old joined Real Madrid in 2016 as a teenager from Uruguayan side Penarol.

He has since become a pivotal part of the Los Blancos team and joins Luka Modric, Nacho Fernandez, Karim Benzema, Dani Cavarjal and goalkeeper Thibaut Courtois to sign an extension.

He has won a single La Liga title and the FIFA Club World Cup including the Supercopa Espana at the club.

Real Madrid started the season with a win and a draw against Alaves and Levante.

Meanwhile, Barcelona has been handed a big boost in terms of injuries as youngster Ansu Fati returns to training.

The forward has been on a nine-month injury layoff and missed the Euro 2020 after picking up an injury in Barcelona’s 5-2 victory over Real Betis on November 7, 2020.

However, Barcelona announced via a tweet on Tuesday that the youngster has returned to training with the senior team

Meanwhile, Barcelona manager Ronald Koeman has revealed that the player is still far from full recovery or matchday appearance.

“Ansu is still recovering from his injury, he is improving. It’s always difficult to say when but if everything goes well in 2-3 weeks let’s see if he can be available to train with the group. And to play games? Probably after the international break.” Koeman said.

Barcelona has started the season indifferently with a 4-2 win over Real Sociedad in the opening game and a 1-1 draw Athletic Club in the second game.