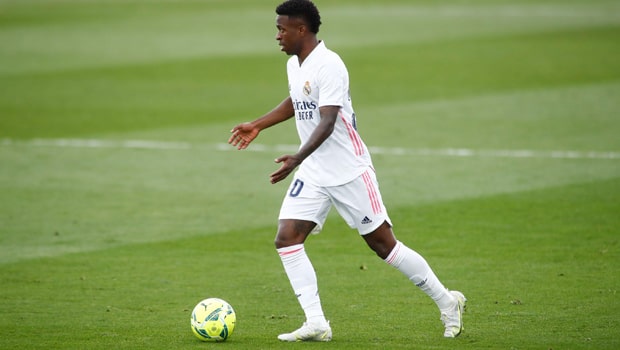 Brazilian forward Vinicius Jnr. will be staying at Real Madrid beyond this summer as indications reveal that the Los Blancos are not ready to sell the forward.

Vinicius played 49 games in all competitions last season with six goals and providing seven assists. While Real Madrid tries to stay in line with the La Liga salary cap, selling Vinicius Jnr was considered as one of the possibilities that could happen.

However, manager Carlo Ancelotti has the former Flamengo star in his plan for the future debunking reports that he could be sold for the right price in the summer.

Premier League club Manchester United was one of the suitors but others indicated that he would not be a part of the deal that will bring Mbappe to the Santiago Bernabeu in an exchange.

Since moving from Brazil Vinicius has scored 14 goals and provided 23 assists from 118 games for Real Madrid.

His contract at the Bernabeu does not expire until 2025.

Meanwhile, Real Madrid is about to hand French striker Karim Benzema a new contract extension. The deal will be for 2 years and see the former Lyon striker at the Santiago Bernabeu till 2023.

Real Madrid cannot afford to lose more players after losing Sergio Ramos to PSG on a free transfer and with speculations still surrounding French defender Raphael Varane who has been linked with a move to Manchester United.

The French defender is said to cost Manchester United 43 million pounds but an official deal is yet to be completed.

Real Madrid has signed David Alaba from Bayern Munich but he is yet to make an official debut after modding Real Madrid’s recent game against the Rangers days ago.

He may miss another pre-season against AC Milan on the 8 of August.