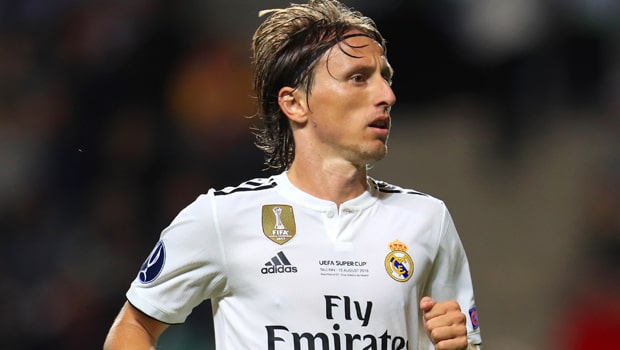 Luka Modric admits he is baffled by Real Madrid’s recent struggles after they slumped to their sixth La Liga defeat of the season against Real Sociedad on Sunday.

Goals from Willian Jose and Ruben Pardo helped Sociedad to a surprise 2-0 victory at the Bernabeu and the result leaves Los Blancos languishing in fifth place in the league standings, a full 10 points behind leaders and bitter rivals Barcelona with the campaign still yet to reach the halfway mark.

Croatia international Modric, who won the Ballon d’Or following his exploits with club and country last year, admits he is at a loss as to why Real are struggling so much this season, although he insists they will work as a team to turn their fortunes around.

“We have to sit down, talk and to see what is our problem,” Modric told reporters.

“It’s not normal, it’s not just one time, this has happened many times. You have to find solutions, lots of players are not performing at their best.”

Modric has also singled out his own form as not being good enough and he feels, as one of the most experienced members of the squad, he has to lead by example.

“I have to improve and assume more responsibility,” the 33-year-old added. “It’s a difficult moment for the club but these things have to unite us more.”

Real have taken just one point from their two games since returning from La Liga’s winter break and they face a difficult looking trip to sixth-place Real Betis next Sunday.

Santiago Solari’s side are priced at 2.10 to return to winning ways at the Benito Villamarin, while Betis are available at 3.40 and the draw is on offer at 3.60.