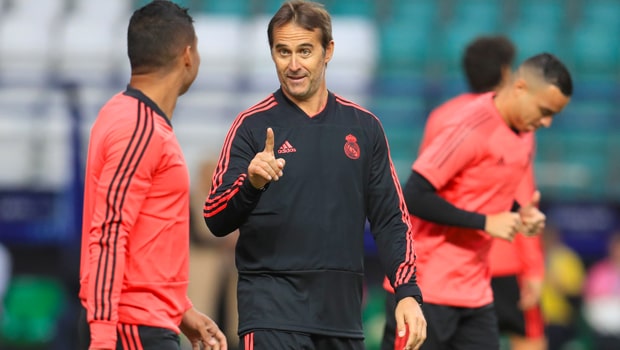 Head coach Julen Lopetegui has vowed to ‘fight’ to turn things around after a poor start to his tenure as Real Madrid boss.

He admits however that he doesn’t know if he will still be in charge this weekend when Los Blancos head for Camp Nou to face La Liga champions Barcelona.

Lopetegui is under pressure following Real’s run of four defeats in five games.

He took control of the Bernabeu giants after leaving his job in charge of Spain on the eve of the 2018 World Cup in Russia, but things have not gone smoothly.

Ahead of a Champions League clash with Viktoria Plzen on Tuesday, the coach was asked if he knew that he would be in the dugout when Madrid visit Barcelona on Sunday.

“I’m here now, that’s all I can say. I am the coach at this moment,” he suggested.

“If you ask me what is going to happen in a month or a year, I can’t tell you. We’re focused on the present.”

With El Clasico on the horizon, Lopetegui may be fortunate to survive a defeat to the Catalans, but he feels that the players, like himself, are ready to fight for the cause.

“Results haven’t been great but we are going to turn this around,” he said.

“What I’ve learned about this club is to fight, that is the DNA of this club. That’s what we’re going to do, fight, both the players and the coaching staff.”